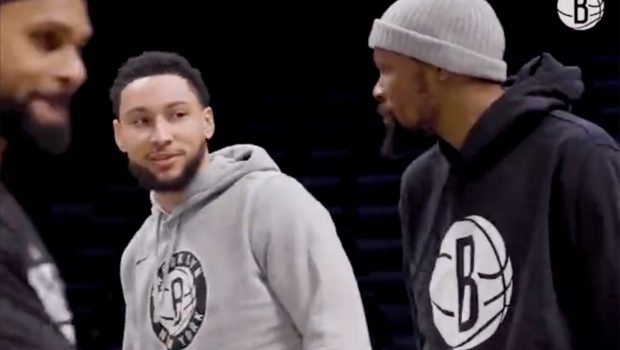 If you still think the Nets got the best of the James Harden-for-Ben Simmons trade, consider what Woj is reporting:

Forget any return to action by Ben Simmons before the NBA playoffs, if the Nets get there, Adrian Wojnarowski reported last night on Sports Center.

“Certainly not the regular season, Woj said when asked if Simmons would be back to help the Nets defense.

“There are four games left in Brooklyn and he’s only doing light shooting on the floor. He’s trying to work himself back from that back injury.

“The Nets are looking at a play-in and the idea that Ben Simmons could be ready in nine days when the play-in starts is not realistic. Brooklyn’s going to have to get into the playoffs before there can be any real conversation about Simmons ramping up to return and play for the first time in 11 months.”

On Simmons, Steve Nash also said he doesn't see the Nets skipping some high-intensity workouts to get him in a game given the long layoff he's had. If he had played for most of the season it's a different story.

Simmons last played in June for the 76ers vs. the Hawks in the post-season. After that, he sat out the regular season through the trade deadline, citing mental health issues being fined nearly $20 million by the 76ers. Simmons joined the Nets after the February 10 trade, but because of his herniated disc diagnosis he has yet to play.