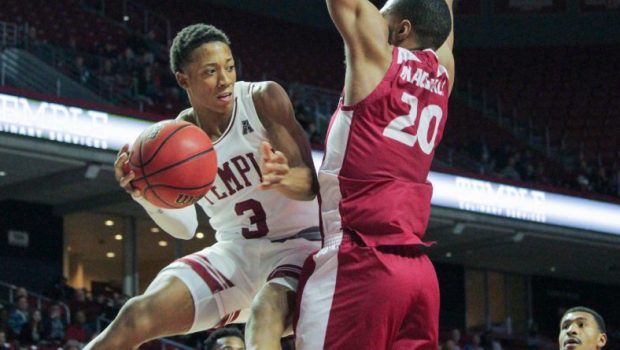 In the American Athletic Conference, teams will test three times per week, but Temple must test its athletes seven consecutive days prior to competition under local rules in Philly.

As college basketball prepares to start its 2020-21 season on Nov. 25 in the middle of a massive spike in COVID-19 from coast to coast, one high-profile coach has a better idea:

A new start date to “save the season” and a delay of the NCAA tournament.

Rick Pitino, who took over at Iona earlier this year, tweeted that college basketball should create “May Madness” and move the Nov. 25 start of the season to accommodate the multitude of delays and challenges numerous teams have faced amid COVID-19.

Save the Season. Move the start back. Play league schedule and have May Madness. Spiking and protocols make it impossible to play right now.

Pitino also called for the elimination of all non-conference games in favor of a league-only slate.

Pitino is echoing what other coaches have conveyed privately.

One high-profile coach recently told ESPN that the current situation for college basketball is “scary.” Another coach in a non-Power 5 league said he thinks it’s “impossible” for his league to play.

Multiple programs have already been sidelined by the NCAA’s recommended 14-day quarantine for teams after a player, coach or staffer (Tier I participants, per the guidelines) tests positive. Iona is currently sidelined for two weeks following a positive test.

With the season set to begin in less than two weeks, dozens of schools have not released their schedules for the 2020-21 season. On Thursday, the Ivy League canceled all winter sports, including men’s and women’s basketball, amid the ongoing pandemic.

NCAA guidelines strongly encourage schools to test three times per week on nonconsecutive days during the season. The NCAA also recommends a two-week quarantine for positive tests. Those guidelines sometimes compete with local and state regulations.A non-Division I coach in Michigan, where state officials have labeled the sport as “high risk,” said his league is preparing to have players compete in masks during games.