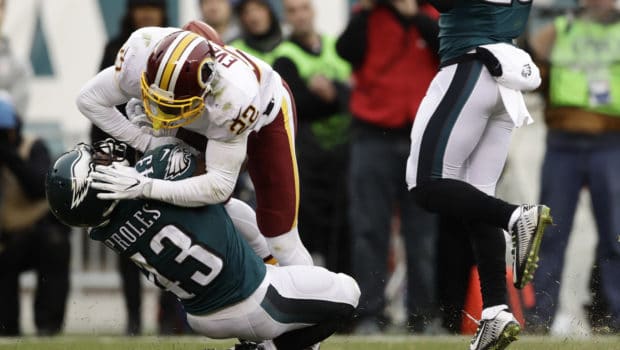 CHRISTMAS GIFT: NO SUSPENSION FOR CHEAP SHOT ON EAGLE SPROLES!

Washington safety Deshazor Everett just got a Christmas gift, courtesy of the NFL!

He admitted he made a mistake by hitting Eagles’ punt returner Darren Sproles so early and so hard it gave Sproles a concussion.

And while it will cost him, it won’t cost him a game.

According to Mike Jones and Mark Maske of the Washington Post, Everett will not be suspended by the league but will be fined for a violent hit on Sproles that knocked the Eagles return man out of the game.

The Eagles felt like it was a “cheap shot,” and it’s not an unreasonable conclusion to reach. Everett got there before the ball did, and while Sproles didn’t call for a fair catch, the ball hit Everett before it could ever get to him.

“If I could have taken that split second back, I definitely would,” Everett said. “It’s too late. You can’t take it back. You can’t rewind. It’s not a video game. You make choices out there on the field, and you’ve just got to live with it. Unfortunately, it was a bad hit.”

And it will likely be a costly one. But at least he’ll have a game check this week to look forward to.