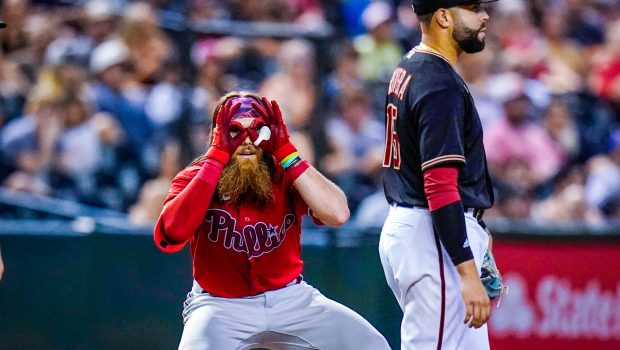 The Phillies, who have won one game in the last 10 days, are back in the second wild card spot by a percentage point thanks to the Pads’ loss to the D’Backs.

But it’s Sept. 6, and there are 28 games to be played, starting tonight against the Marlins at CBP.

Here’s their state of play, according to The Athletic’s Matt Gelb:

The Phillies have endured 3,986 days without postseason baseball, so it was irresponsible to assume anything about this would be simple.

It has felt like forever since the Phillies played meaningful games in October. Whenever it feels possible, it has fallen apart fast.

The players who inhabit this roster know the history.

For the last week, as the Phillies lost five of six games, they have pushed back against the past that permeates the clubhouse walls.

The Phillies (73-61) are asking for the benefit of the doubt.

Maybe it is warranted because they are on pace for 88 wins and aren’t chasing someone for a postseason spot.

They started the road trip with a four-game advantage over Milwaukee and ended it with a 2 1/2-game lead — a minor miracle considering how bad the Phillies were against the Diamondbacks and Giants.