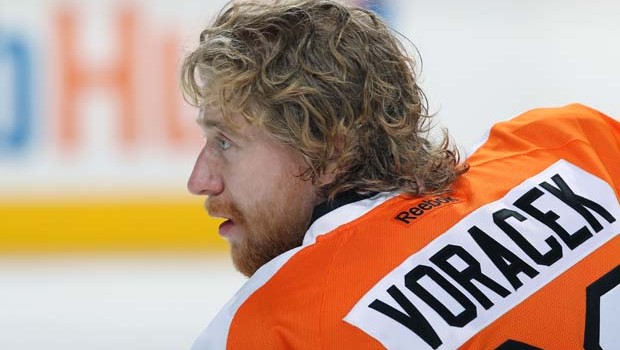 NO OFFENSE, BUT WILL FLYERS EVER WIN AGAIN THIS SEASON?!

Jakub Voracek scored 22 goals last season and tied for fourth in the league with 81 points, but doesn’t have a goal through 16 games despite 58 shots and has only five assists. He had seven goals and 19 assists after 16 games last season. Voracek also has only one goal in his last nine meetings with the Hurricanes.

The Flyers are desperate for a victory, for some good news — anything as they prepare for tonight’s game in Carolina.

And newbie head coach Dave Hakstol is feeling the heat.

“I’m concerned, that’s it, bottom line,” coach Dave Hakstol said. “But we’re going to go back to work tomorrow to make sure we push things in the right direction.”

While Carolina’s 31.5 shots per game rank near the top of the league, the Flyers are averaging only 23.4 over its last five contests and generated a season-low 20 shots against the Capitals.

Steve Mason struggled again Thursday with 27 saves on 32 shots in his first start in 10 days after being sidelined because of an illness. He owns a 3.55 goals-against average, though his 1.91 mark against Carolina is his second-lowest against an opponent he’s faced at least 10 times, trailing his 1.86 average against Florida.

The Hurricanes and Flyers have both struggled offensively ahead of Saturday night’s Metropolitan Division matchup, though the host Hurricanes will hope to draw on their recent success in the series.

The Hurricanes lost 3-2 in overtime to visiting Minnesota on Thursday despite 39 shots and a 2-0 lead at the 8:17 mark, though they recorded only three second-period shots.

They’re in the midst of a stretch that sees them play nine of 10 at home, though they’re 2-4-1 there this season. They have five power-play goals on 22 chances at home but own a minus-10 even-strength goal differential.

“Our intensity and lack of effort in the second period denied us the opportunity to get two points,” coach Bill Peters said. “This homestand is huge. There are four games left now, right? It’s absolutely huge. We’ve talked about it a million times. We know how it works, standings-wise. We understand what’s at stake.”

Carolina has won five straight at home against Philadelphia and eight of the last nine meetings overall with six victories decided by one goal or in a shootout.