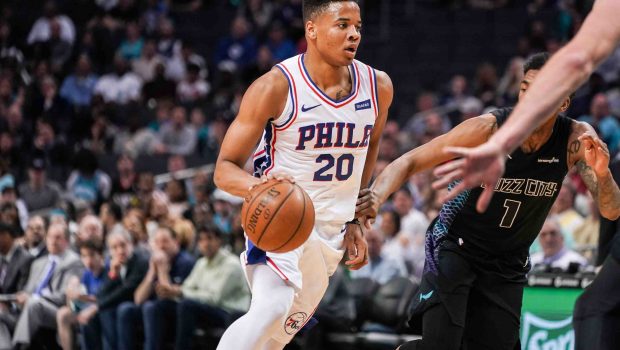 NO LONGER A ROOK, SIXERS MARKELLE FULTZ IS PAST HIS LOST YEAR!

As soon as he saw Ben Simmons pushing the ball on a Sixers fast break, Markelle Fultz immediately drifted to the open spot in the left corner. Simmons found him, and Fultz, after one calm dribble, confidently launched what has to be the most celebrated 3-pointer in these parts since Villanova’s Kris Jenkins beat North Carolina for the 2016 NCAA title.

It was a historic shot for Fultz, the first 3 he had made during a game while wearing a 76ers uniform last Monday against the Orlando Magic.

“I’ve been working on my shot all summer,” Fultz said. “If I have the shot, I’m going to take it.”

That wasn’t the case last season when Fultz’s right shoulder injury, a scapular muscle imbalance, limited him to 17 games and left him indecisive.

In a matter of months, Fultz, a 41 percent shooter from 3-point range at the University of Washington, went from dominant college player to a rookie in distress. A severe hitch in his jumper left him open to ridicule and led many to wonder whether his career would be a bust.

That sentiment from Fultz is, clearly, a stretch. But Fultz did come under a great deal of scrutiny, much of it for the wrong reason:

0 thoughts on “NO LONGER A ROOK, SIXERS MARKELLE FULTZ IS PAST HIS LOST YEAR!”