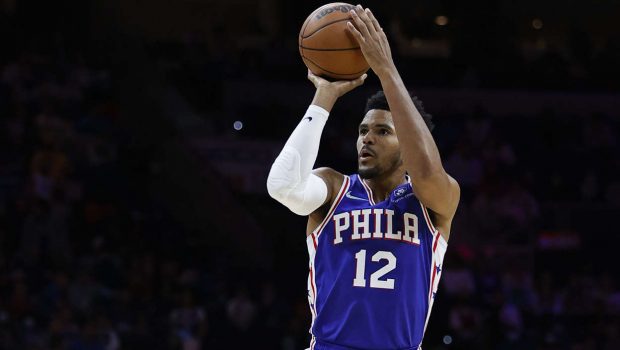 NO JOJO OR THYBULLE TONIGHT, SIXERS HARRIS HAS TO STEP UP!

Tobias Harris played 27 minutes Tuesday night at Utah and had only 12 points and 4 rebounds.

There’s been no official word if the Sixers will get Joel Embiid and Matisse Thybulle off the COVID list.

But the sports books along the Strip think they’ll be out again tonight at the Nuggets.

Here’s what The Action Network says:

The same thing that has plagued the Sixers for the last five games will rear its ugly head on Thursday — Joel Embiid will miss yet another game under the league’s health and safety protocols.

The Sixers have not won a game since Embiid went on the shelf last Monday, and they’ve lost Matisse Thybulle to the health and safety protocols along with Embiid. This has hampered Philadelphia’s ability to score, and it’s dealt a critical blow to its defense, both inside and out.

While much has been made about Embiid’s impact on the offensive end, the aforementioned issues on defense are the biggest issue right now. In the last five games, the Sixers have ranked 28th of 30 teams in Defensive Efficiency. Their 106 points per 100 possessions is actually somewhat impressive given the injury to Embiid and the loss of Danny Green, who will miss another game due to a hamstring issue.

Philadelphia has the rotation players to get it done in the scoring column, with some great contributions out of Tyrese Maxey and Shake Milton against the Jazz on Tuesday, but it got taken to school inside by Rudy Gobert and Hassan Whiteside.

The Sixers also had to endure a miserable 27 minutes from Tobias Harris on the offensive end. Perhaps a combination of a slightly less efficient offense and some positive regression from Harris is enough to get this team contending again on Thursday without Embiid.