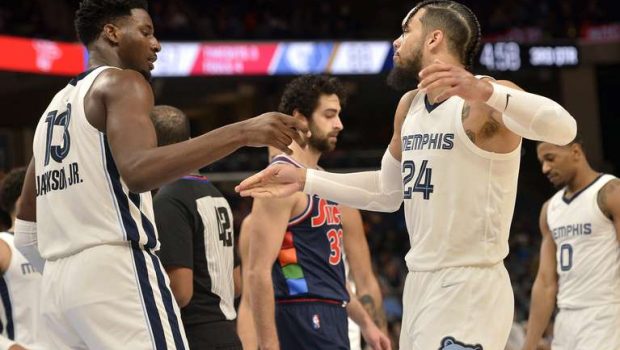 NO JOJO, NO SETH, NO CHANCE, SIXERS BLASTED IN MEMPHIS

The high from Saturday night’s Sixers win over the Warriors was a distant memory.

And so were Joel Embiid and Seth Curry, who were out last night for the Sixers in Memphis.

Right from the start.

Tyrese Maxey led the Sixers with 23 points, and Charles Bassey added 13 and 10 rebounds. Shake Milton and Tobias Harris ended up with 12 points each.

They played without Curry and Embiid, who was a late scratch with right rib soreness. Both were declared out shortly before game time.

“Obviously, it hurt us,” Harris added. “That’s a big scoring punch. With Joel, he’s been where our offensive game really flows through. For us, it was just a tough adjustment.”

Part of Philadelphia’s problems were from 3-point range, where it went 4 for 22. The Sixers’ 15 turnovers led to 18 Memphis points.

Memphis led by 12 points at the half and stretched the advantage to 82-60 with a 14-4 run to open the third quarter. That was only the start: Memphis was up 101-75 entering the fourth, in part because of Jackson’s 13 third-quarter points, and because the Sixers turned the ball over six times in the quarter.

By that point, Rivers let his reserves close out the game. Memphis’ lead got up to as many as 36 in the fourth.

“We couldn’t get stops all night,” Rivers said. “It was just the theme all night. I think they had (101 points) going into the fourth quarter. You’re not supposed to win any games like that.”