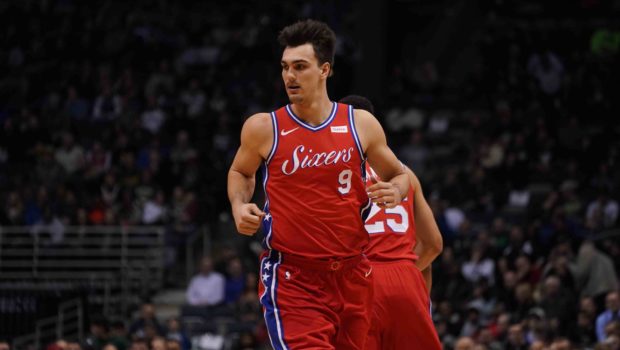 The Milwaukee Bucks won their fourth straight game since coach Jason Kidd was fired by beating the Sixers 107-95.

Giannis Antetokounmpo had 31 points and 18 rebounds, and Matthew Dellavedova scored all 10 of his points in the fourth quarter for the Bucks, who moved to 27-22 and look like a contender again in the Eastern Conference.

The Sixers didn’t have All-Star center Joel Embiid, who sat out to rest. Milwaukee has also beaten losing teams in Phoenix, Brooklyn and Chicago under new coach Joe Prunty, the assistant who took over on an interim basis after Kidd was fired last Monday.

Dario Saric (above) had 19 points to lead the cold-shooting Sixers, who were 2 of 26 from 3-point range a night after going 11 of 29 in a loss at Oklahoma City. Ben Simmons added 16 points.

“Maybe we left them in Oklahoma,” Saric said about the off night from the arc. He missed all eight of his 3-point attempts.

The Sixers scored 22 of their first 26 points in the lane. But the Bucks figured out how to limit the Sixers down low, too.

Philly was overpowered without Embiid in the middle, and Antetokounmpo picked up his 22nd double-double of the season.

“Without Joel, we knew that if we were going to win, we needed a successful 3-point night,” 76ers coach Brett Brown said. “We had to find points from somewhere.”