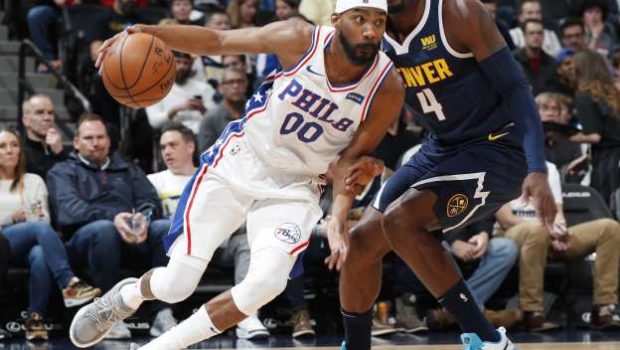 NO JOJO, NO BUTLER, SO SIXERS HAD NO CHANCE AGAINST NUGGETS!

Denver’s Nikola Jokic posted his seventh triple-double of the season in his return from a one-game suspension and the host Nuggets beat the Sixers 126-110.

The 76ers gave leading scorer Joel Embiid the night off, robbing fans of a Jokic-Embiid showdown but allowing their star to get a six-day midseason break before their next game Tuesday night against the Lakers in Los Angeles.

Jimmy Butler also missed the game with a sore wrist.

Jokic, the Nuggets’ leader in points, rebounds and assists, missed Denver’s 132-95 rout of the Phoenix Suns on Friday night when he was handed a one-game suspension for leaving the bench during an altercation in Utah earlier in the week.

Denver coach Michael Malone said he didn’t think Jokic would be any more fired up than usual.

“I don’t think he’s going to use it as any added motivation,” Malone said. “I think he’ll come back and look to help his team win another game at home against a quality team from the Eastern Conference.”

Jokic did just that, scoring 17 first-quarter points on his way to a 20-point, 12-rebound first half.

Through three quarters, Jokic had 28 points, 17 boards and nine assists, and he got the triple-double shortly after re-entering the game midway through the fourth quarterwith a half-court pass to Malik Beasley.