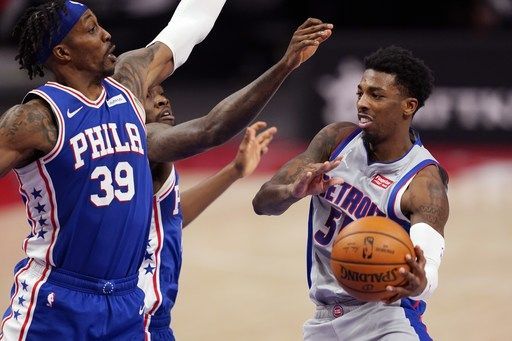 The Sixers rested NBA MVP contender Joel Embiid last night in Detroit so he would be fresh tomorrow at home against the Lakers.

And they paid the price.

Delon Wright scored a career-high 28 points and Philly’s own Wayne Ellington shot the lights out to lead the Pistons to a 119-104 victory.

Former Sixer Jerami Grant scored 25 points for the Pistons (4-13), who still have the NBA’s worst record but took advantage of Embiid’s absence caused by back tightness.

The Pistons never trailed, and Ellington scored 20 points, shooting 6 of 9 from 3-point range. It was his fifth straight game with at least four 3s, tying a team record set by Joe Dumars in 1998-99.

Tobias Harris led Philly with 25 points, but the 76ers (12-6) never made much of a run after the Pistons controlled the early going. Detroit’s Josh Jackson was ejected in the fourth quarter, but Philadelphia couldn’t take advantage.

”We didn’t play well tonight. This was a very winnable game in my opinion, we just didn’t win the game,” Rivers said. ”I’m not going to overdo it right now. Way too early. … I like our team. I like how we’re playing overall.”

There were five technical fouls in the game.

Detroit took an early 17-4 lead and was still ahead 64-50 at halftime. The third quarter came and went without the lead getting any tighter than seven, and it was never closer than nine in the fourth.

”We want to make this our normal thing,” Wright said. ”We don’t want to celebrate a win. We want to continue to get wins and build on it.”