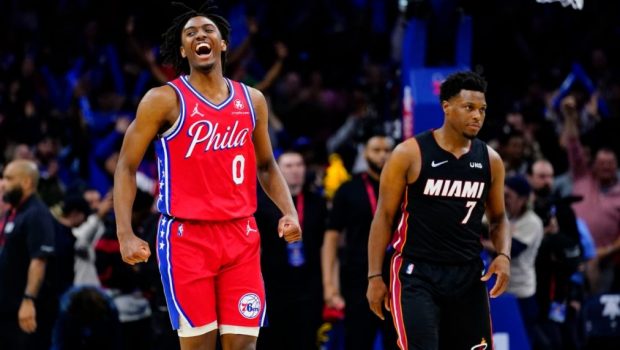 NO JO, NO BEARD, NO PROB: MAXEY LIFTS SIXERS TO DUB OVER HEAT!

Last night’s Sixers-Heat game at the Wells was a prime example of how NBA teams manage to encounter hardship and persevere.

The Sixers rested stars Joel Embiid and James Harden, and the smart money moved to the Heat, who are first in the East.

But it turns out that rest gave coach Doc Rivers a chance to get quality minutes from his much-maligned bench.

And it came through.

Tyrese Maxey scored 13 of his game-high 28 points in the fourth quarter, including nine in a row during a crucial stretch, and the Sixers won 113-106 and pulled into a tie with the Bucks in second place in the East, 2 1/2 games behind Miami..

Shake Milton scored 20 points and Furkan Korkmaz added 18 for Philly, whose Embiid sat out with back soreness and Harden with left hamstring tightness.

Maxey took over the final 2½ minutes with the game on the line.

The Sixers had a two-point lead when Maxey scored on a drive, was fouled and made the free throw for a 106-101 lead with 2:18 left.

After Jimmy Butler missed a 3-point try, Maxey hit a step-back 3 for a 109-101 lead. Kyle Lowry and Tyler Herro couldn’t convert at the other hand, and the second-year guard from Kentucky drained another 3, this time for a 112-101 lead with 1:03 to play that brought “MAX-EY! MAX-EY!” chants from the sold-out crowd which usually reserves the loudest cheers for Embiid.

“He’s just not scared; he’s so comfortable in the moment,” Sixers coach Doc Rivers said. “He’s put in so much work. The more work, the more confident you are, and I think that’s a great testament for Tyrese Maxey.”

After the Heat stole a Philadelphia inbound pass with the 76ers up six points, Maxey raced down the court and blocked Caleb Martin’s attempt with 21 seconds remaining — resulting in more “MAX-EY! MAX-EY!” chants.

“I was thinking either he’s going to dunk on me, or I’m going to get this block,” Maxey said. “It’s one of those you have to put your body on the line.”

Butler scored 27, Bam Adebayo had 22 and Lowry 20 for Miami, which lost for just the fifth time in the last 20 games.

Philly fans are used to chanting this season, but it’s usually “M-V-P! M-V-P!” for Embiid.

“Great feeling to see all the work you put in come together,” Maxey said.

Embiid entered Monday tied with LeBron James for the NBA lead in scoring (29.8 ppg). The five-time All-Star is one of the frontrunners for the MVP award.

But Maxey took center stage with Embiid on the sidelines.