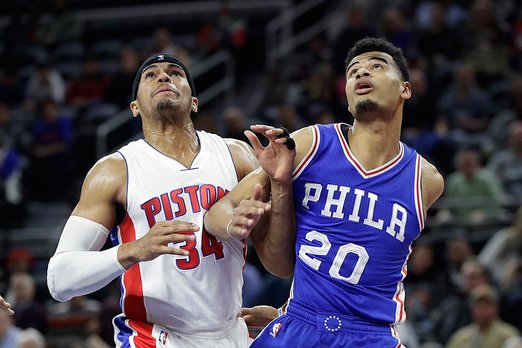 The Detroit Pistons made their first six shots of the second half and went on to an easy 113-96 victory over the Sixers night.

Detroit led 55-46 at halftime before outscoring Philly 34-21 in the third period. The Pistons were never seriously challenged after that.

Nine players scored at least eight points for the Pistons. Marcus Morris led the way with 19, and Reggie Jackson scored 14. Jon Leuer, Kentavious Caldwell-Pope and Aron Baynes had 12 each.

Detroit outscored Philly 31-19 in the second quarter, and Drummond already had 11 rebounds by halftime. The third quarter was just as bad for the 76ers. After a couple of 3-pointers by Caldwell-Pope, the Pistons were up 67-52, and the lead eventually reached 26 after a 3 by Jackson. That shot put Detroit up 82-56, and it came after the Detroit point guard left T.J. McConnell on the ground with a crossover dribble .

The Pistons took over sole possession of the eighth and final playoff slot in the Eastern Conference, breaking a tie with idle Charlotte.

Okafor returned after missing Saturday’s game at Miami with right knee soreness. He’s been the subject of trade speculation, and he was asked about that after the game.

“He’s been a star,” Brown said. “My level of respect for Jahlil Okafor, how he’s managed and handled this situation, how you can still remain a wonderful teammate and still retain a competitive edge … he’s got a lot to be proud of. He’s a wonderful person and for him to come out and jump into this game like he did and show his skill, I’m proud of him.”