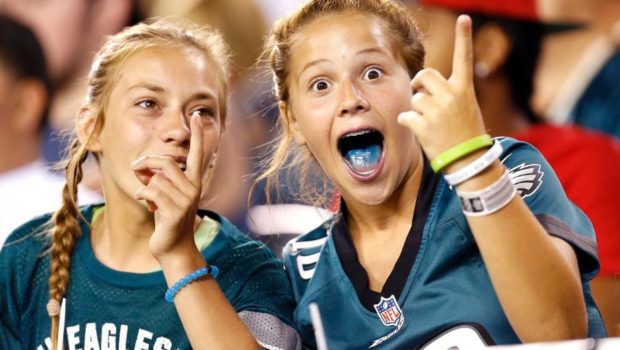 NO FANS AT EAGLES GAMES AT THE LINC ANY TIME SOON!

Pennsylvania Health Secretary Dr. Rachel Levine didn’t give any indication that either the Eagles or Steelers would be allowed to have fans in the stands anytime soon.

The Eagles announced last month it would not have any fans in the stands at Lincoln Financial Field “until further notice.” The Eagles home opener is Sept. 20 against the Los Angeles Rams.

It depends on the location and state health department on whether an NFL game will have spectators. Thursday night’s season opener, the Houston Texas against the Kansas City Chiefs, did have about 16,000 socially distanced fans in the stands in the 80,000-seat Arrowhead Stadium.

Levine wouldn’t comment about the Chiefs-Texans decision but said Pennsylvania believes it’s in the public’s best interest not to have fans in the stands in PhilLY or Pittsburgh while the Covid-19 pandemic is still a threat.

“The governor strongly feels and I strongly recommend that we do not put people at risk in terms of putting them together in congregate settings,” she said in a response to a question at a Friday morning news conference. “We have a 250-person outdoor limit, so there will be no fans. It’s impossible for me to predict the future, so we’ll see.”

Levine said that there would have to be a “substantial reduction” in the amount of community spread of the SARS-CoV-2 virus before the decision could be revisited. She said there was also hope for a Covid-19 vaccine but declined to put a timeline on when the outdoor gathering limit could be expanded.

“We are very pleased to engage with the Steelers and the Eagles anytime and have discussions, but we have no plans at this time to have fans come,” she said.

Meanwhile, Levine said the Covid-19 pandemic was far from over and that the biggest increases in cases in recent weeks has been at colleges and universities across Pennsylvania. She said that there had been an increase in overall cases last week but this past week has been what she termed up and down, probably due to the Labor Day holiday weekend. She said it would take at least two weeks to see the impact of the holiday on case counts.