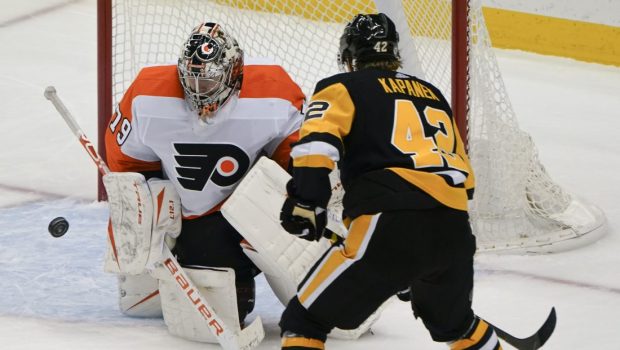 NO FAIR: FLYERS LOSE TO PENS AND THEIR FANS IN THE ARENA!

The Flyers aren’t in Buffalo anymore.

Philly shut out the Sabres in back-to-back games and seemed back on course after getting embarrassed by the Bruins in Lake Tahoe.

Well, Pittsburgh has the Penguins.

And lots of fans in PPG Paint Arena.

The Penguins won in front of their fans for the first time in almost a year, as state coronavirus restrictions were eased at the beginning of the month and spectators were allowed into the building. Penguins’ players raised their sticks and saluted the fans in attendance following the win.

“It was unbelievable,” Kapanen said. “It’s been a while since we played in front of fans. Even though there were only 2,800, it felt like there was 20,000. It feels like things are kind of going back to normal, so it was fun to see.”

The Penguins, who are tied for the most home wins since the beginning of the 2019-20 season, rebounded from one of their worst performances of the season, a shutout loss to the New York Islanders on Sunday.

“I thought mentally we were there,” Farabee said. “I just think the execution was a bit off all over the ice, so we’ve got to regroup.”

As evidence: Hart was heading to the bench for an extra attacker with just under four minutes remaining, when Matheson gained control of the puck just outside his own blue line and shot past a sprawling Hart for the final goal.

Couturier established a career-high seven-game point streak with his assist on Farabee’s goal.

Kapanen scored his second goal of the game on the power play at 8:41 of the second and Rust gave Pittsburgh a 3-1 lead at 10:45 of the period. Rust finished Kris Letang’s point shot from the top of the crease.