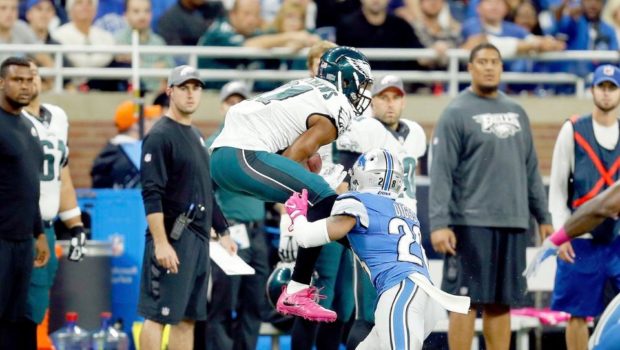 NO DOUBT ABOUT IT: ZEBRAS COST EAGLES A WIN ON SUNDAY!

Lots of Eagles fans think the zebras cost the Eagles their perfect season.

He says the officials botched the call on a crucial fourth-quarter fumble in Sunday’s loss to the Lions.

But that wasn’t the only play that brought scrutiny on the officials in Detroit.

In an earlier play, the Eagles were called for an ineligible man downfield, wiping out a 27-yard pass from Carson Wentz to Jordan Matthews (above). But there was an odd thing about the penalty referee Pete Morelli announced: He called it on No. 98 of the Eagles, even though No. 98 of the Eagles is a defensive player, Connor Barwin, who wasn’t on the field at the time.

Then, without turning on his microphone to explain why, Morelli marched the teams down the field and spotted the ball where Matthews caught it, rather than enforcing the penalty.

So what happened? Justin Rogers of the Detroit News reports that the official who threw the flag forgot which team was on offense and threw it on Lions defensive end Devin Taylor, who wears No. 98. Morelli heard his fellow official say there was an ineligible man downfield on No. 98, and called it on the offense, and it was only after a conference that the officials figured out their mistake and waved off the flag — without telling the crowd.

“Yes, the ineligible receiver that they called downfield was Devin Taylor,” Lions coach Jim Caldwell said after the game. “Then he realized that he called it on Devin and said that’s why they picked the flag up.”

That’s an extremely bizarre mistake. It’s a good thing that the officials huddled up and realized their mistake, but it doesn’t speak well for them that they made the mistake in the first place — or that Morelli announced the wrong penalty and then failed to announce a correction, leaving the fans puzzled about what was going on.