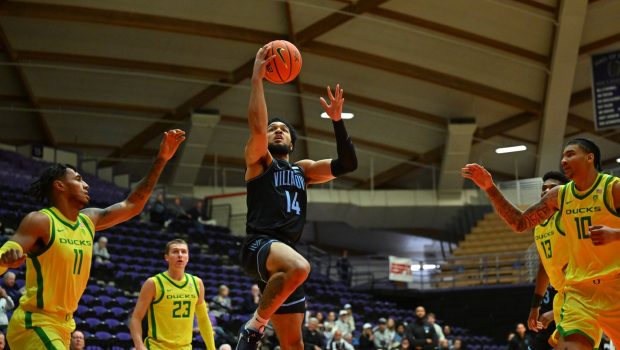 Quincy Guerrier made six 3-pointers and Oregon beat Villanova 74-67 in the consolation round game of the Phil Knight Invitational.

Guerrier’s sixth 3 tied it, Richardson made a free throw and made consecutive shots to end it.

Oregon had a double-digit lead with 8:50 left after Lok Wur hit a 3 to make it 58-48, but the Wildcats answered with 3s from Caleb Daniels and Chris Arcidiacono sandwiched around an Eric Davis layup to get within three, 59-56. Dixon’s jumper with 3:09 tied the game and Hausen gave Villanova its first lead since a Daniels layup to go up 4-2.

Guerrier hit 6 of 10 from beyond the 3-point arc and finished with 21 points and eight rebounds to lead Oregon (3-4), which hit 11 of 29 from distance. Richardson scored 19 points and dished eight assists and Kel’el Ware added 13 points and seven boards. Rivaldo Soares contributed 10 points, eight rebounds and three assists.

Daniels paced Villanova (2-5) with 16 points, four rebounds and five assists. Hausen came off the bench to hit 5 of 8 from beyond the arc and add 15 points. Eric Dixon added 13 points and grabbed six rebounds.