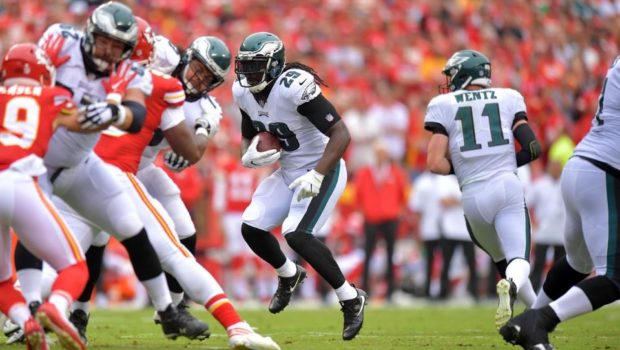 NO-CARRIES BLOUNT! HEY, DOUG PEDERSON, IF YOU’RE NOT GOING TO CALL HIS NUMBER WHY DID YOU SIGN HIM?

LeGarrette Blount got only one touch — a check-down pass and no carries — against the Chiefs. “It’s just how the game went,” Blount said. “It wasn’t going the way we wanted it to so we had to make some changes. I can’t argue with how the game is going, the flow of the game.”

And then he had the balls to say this:

Well, who in the world is calling those plays?

“Obviously more balance is the way to go, but it was the nature of the game and the way they were playing some things, the things we thought we could take advantage of that kind of led us down that road,” quarterback Carson Wentz said after the game. “I am not overly concerned about the running game. I know that will be a big part of the offense going forward. It was just the flow of the game today.”

Darren Sproles had seven carries for 37 yards at halftime. Despite averaging 5.3 yards per carry, he only carried the ball three times in the second half.

“We threw the ball a lot today, and part of it was because we weren’t very effective in the run game,” tackle Lane Johnson said after the game. “In order to win games, you have to be able to run the ball. Unless you have Tom Brady or guys like that. We have to run the ball. We have to take the pressure off Carson.”