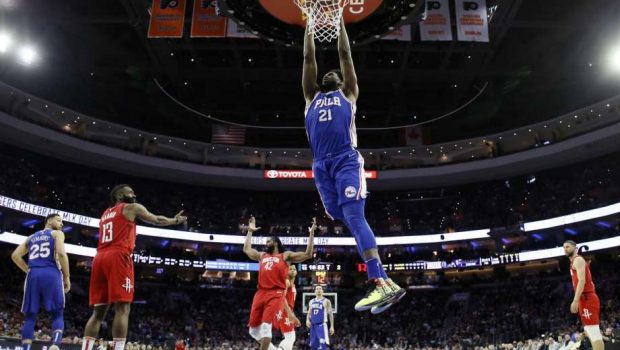 NO BUTLER, NO PROB: JOJO’S SIXERS BLOW AWAY ROCKETS!

Joel Embiid had 32 points and 14 rebounds to lead the Sixers past fellow MVP contender Harden and the Houston Rockets 121-93.

“I love playing against guys you guys say are better than me,” Embiid said.

Harden, selected Western Conference player of the week earlier in the day, finished with 37 points – giving him 20 straight games with at least 30.

The Sixers played without four-time All-Star Jimmy Butler (sore right wrist), and Embiid more than made up for his absence.

“It was really fun for us,” Embiid said. “Don’t think it was fun for them.”

Embiid was questionable before the game with lower back soreness and coach Brett Brown hinted during pregame it might be best for the Philadelphia big man to sit this one out. Embiid clearly had other intentions.

“I want to fight with my teammates,” he said. “Whatever I have to do, I’ll do for my team.”

His 24 first-half points helped Philly to a 65-50 halftime lead, and he punctuated an entertaining opening 24 minutes by pinning Harden’s layup attempt with 7.5 seconds left for a crowd-pleasing block.

The duo had to be separated with 38.7 seconds left in the half, with each being issued a technical, after Harden took exception to Embiid’s foul on him.

The 76ers broke the game open in a dominant third quarter as they outscored Houston 29-13 to take a 94-63 advantage into the fourth. Ben Simmons stole Harden’s pass, made a layup and finished a three-point play after being fouled by Harden to make it 73-52. The lead kept growing, getting as large as 31.

“We were due for a game like this,” Rockets coach Mike D’Antoni said.

Harden had 10 points in the third but missed four of six field goal tries as the 76ers hounded him defensively with double-teams and different looks. A tired-looking Harden’s air ball with 12.3 seconds left in the third showed the effects of the Philadelphia defense – and, perhaps, Harden’s offensive workload.

With the game out of range, Harden sat in the fourth.

“This is not a great way to rest him, but we rested him today,” D’Antoni said.