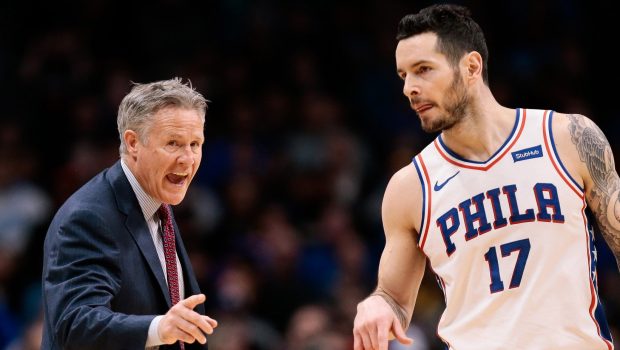 NO BUS FOR EX-SIXER JJ REDICK: BRETT BROWN WAS A CLASS ACT!

Most of the present members of the Sixers have happily thrown fired coach Brett Brown under the bus for his coaching deficiencies that led to their first-round exit from the playoffs.

But one former Sixers begs to differ!

In the latest episode of his own podcast, former Sixers sharpshooter JJ Redick opened the show by going to bat for Brown – and also former Pelicans coach Alvin Gentry, who was fired earlier this month.

Here’s what Redick and co-host Tommy Alter had to say about Brown (and Gentry):

Specifically with Brett, a seven-year run in Philly is crazy, given where –

Alter: Especially in Philly, of all cities.

Redick: – [Laughs] Yeah. And especially given where that process started seven years ago. It speaks a little bit to the type of person he is, his acumen as a coach. I can’t imagine, as a coach, going into that situation, knowing what the intention was – trying to, essentially, get high draft picks.

Alter: It’s very rare where, in one coaching tenure, you go from literally the bottom of the league to Finals or bust expectations. And your team, both years you were there but especially last year’s team, it was a disappointment when you didn’t make the Finals.