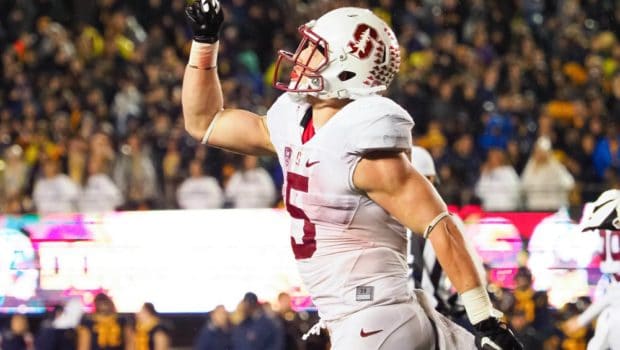 THIS IS A NO-BRAINER! EAGLES NEED TO DRAFT A RUNNING BACK!

Stanford’s Christian McCaffrey has been compared to former Eagles running back Brian Westbrook. McCaffrey could give the Birds a versatile weapon that could line up all over the formation.

Mock drafts are fun, and we post one daily, as we have today.

But nothing should be driving the Eagles’ selections in the April 27-29 NFL draft on the Ben Franklin Parkway more than need.

Mathews has been injury-prone his entire career. Once he recovers from the neck injury that prematurely ended his 2016 season, he will most likely be released.

Sproles has been an electrifying player since coming to Philly in 2014, but he will likely retire after the season.

Smallwood was effective in limited touches. It remains to be seen how he will perform in an increased role.

If the season started today, Smallwood and Sproles would be the top two running backs on the Eagles’ roster. While they are both skilled players, upgrades are sorely needed.

Luckily for the Eagles, this year’s running back class is deep, so there will plenty of options to consider. Florida State’s Dalvin Cook has been the biggest name linked to the Eagles. He could give them the home-run threat they haven’t had since McCoy was traded.

If the Eagles choose not to address the running back position early, players like Joe Mixon and Kareem Hunt could be in play in the later rounds. Mixon has character concerns, but many scouts and general managers believe he will be a second-round pick; Hunt, on the other hand, could be a late-round gem.