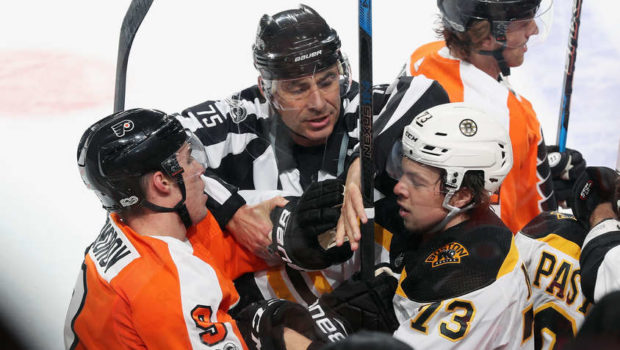 NO BOTTOM IN SIGHT! FLYERS LOSE 10TH STRAIGHT, 3-0 TO BRUINS!

When the stock market is sinking like a rock, everybody is racing around screaming, “Where’s the bottom?”

Think of the Flyers like you would think of the Dow-Jones, and the bottom is nowhere in sight!

They lost their 10th consecutive game, 3-0 to the Boston Bruins at the Wells.

“The last two games, I think we’ve been chasing behind,” Flyers center Travis Konecny said. “Other than that, we’ve been right in those games. It’s definitely hard to chase leads when you’re fighting to win games, but we still have to find a way to turn it around here. We just have to keep plugging away.”

Tuukka Rask made 28 saves for his first shutout of the season and 39th of his NHL career, and David Pastrnak and Brad Marchand each had a goal and an assist for the Bruins (12-8-4), who have won six of seven.

Ryan Spooner gave the Bruins a 1-0 lead at 14:30 of the first period. Noel Acciari forced a turnover in the Philly zone and fed Spooner, who skated past two Flyers before coming in on goaltender Brian Elliott and beating him through the five-hole. It was Spooner’s his first goal of the season and first in 23 games since he scored on March 4 against the New Jersey Devils.

Pastrnak scored his Bruins-leading 13th goal of the season at 6:38 of the second period to give Boston a 2-0 lead and extend his point streak to five games (three goals, three assists).

“We knew Philadelphia was kind of struggling for a while now, so we wanted to make sure we came hard at them, and I think we did a pretty good job,” Pastrnak said. “The first goal is big, especially against a team that’s not doing that well lately. It was a good win for us and a good way to start the road trip.”

“We were ready,” Marchand said. “We were prepared from the drop of the puck. It was a big win for us. We want to keep building and keep getting better and we did that again tonight.”

Philadelphia’s Claude Giroux beat Rask during a power play with 59 seconds remaining in the second period, but the goal was overturned after the Bruins successfully challenged for goaltender interference.

“You have to let it not take the wind out of your sails, we still had a power play after that and everything so we have to just accept it and move on,” Elliott said. “If you get hung up looking at those things, saying what could have been, the game is going to answer back.”

“I’m sure he is feeling pretty good about his game and he should tonight,” Cassidy said. “He looked as comfortable as I’ve seen him. …He got beat with a good shot, we were fortunate enough to challenge, get a call go our way, but other than that. It didn’t look like they were going to get anything by him all night.”

Elliott made 24 saves for the Flyers, who were shut out for the sixth time this season.

“I think we’re working really hard, but sometimes I think when you’re spinning your tires a little bit, nothing gets accomplished,” he said. “We played a good team that has very good structure, and if you don’t make the smart play every time they are going to turn around and bring it the other way.”