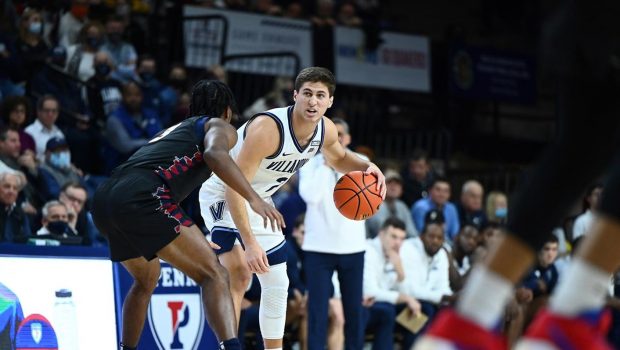 Collin Gillespie scored 26 points and Brandon Slater 16 and No. 6 Villanova beat Penn 71-56 at the Palestra.

Gillespie’s 15.5 points per game are a career high and his 43% 3-point shooting is also better than any of his previous four seasons.

”There were games where I wasn’t as aggressive,” he said. ”I just try and stay aggressive at all times. Just try and become more of a complete player.”

Gillespie, making his 94th start over five seasons, hit four 3s in the first half and pushed back the smallest of Penn runs. He hit one for a seven-point lead, another for an 11-point lead and one more for a 16-point edge. That was good enough to hit cruise control against the Quakers (3-7). He finished 9-for-15 from the floor, and played 35 minutes without an assist.

Gillespie returned for a fifth season after he missed the end of last year with a torn MCL in his left knee.

The Wildcats played their second straight game at the Palestra against a Big 5 school following Sunday’s 26-point win against La Salle. The Wildcats needed the breather after opening the season with losses to No. 5 UCLA and No. 2 Purdue and a win against No. 13 Tennessee.

The building came alive briefly early in the second half when Clark Slajchert buried a 3-pointer, hit another basket and Penn forced a shot-clock violation that made it 43-34. Max Martz hit a 3 with 5:16 left that kept it a nine-point game.

The Wildcats had won a city-record 25 straight games before it lost to Penn in 2018 and hasn’t lost a Big 5 game again over that span, sucking the life out of the city series.