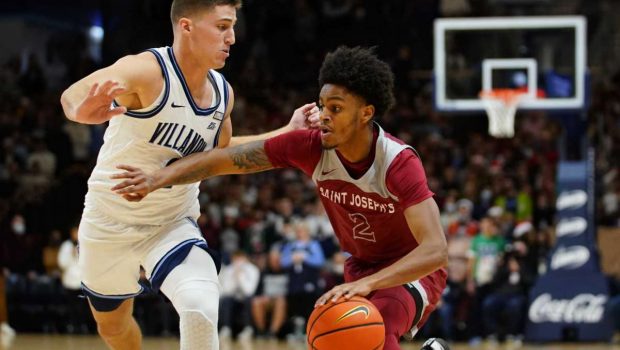 Collin Gillespie scored 23 points to lead No. 6 Villanova to an 81-52 victory over Saint Joseph’s.

Justin Moore added 16 points and Eric Dixon had 12 for the short-handed Wildcats (6-2), who won their 10th straight in a series dating to 1921 between the Big Five rivals.

“That was a good defensive performance by us,” Villanova coach Jay Wright said. “I was impressed.”

“That is a great Villanova basketball team,” said St. Joe’s coach Billy Lange, who was on Wright’s staff at Villanova for five seasons. “I believe it is the best team he’s had in 20 years. It might not be overall the most talented … To me that’s a perfect team.”

The Wildcats have been dealing with a non-COVID virus for more than a week. It forced several players to quarantine away from the team this week.

Wright said Friday that three players were questionable for this game, but only Caleb Daniels was unable to play. A second-year transfer from Tulane, Daniels came off the bench in the previous seven games this season and averaged 9.4 points.

Wright said the Wildcats have used health and safety protocols to prevent other players from getting sick.

“It’s unbelievable how we went right back into COVID mode,” Wright said Friday.

The Wildcats still had plenty to easily beat Saint Joe’s.

After going scoreless in the first half, Moore scored Villanova’s first seven points of the second half, on a pair of 3-pointers and a free throw, to push the Wildcats’ lead to 41-22 3 1/2 minutes into the second half.

“My teammates found me in the right spot,” Moore said.

And Villanova’s lead continued to grow as the Hawks couldn’t find enough offensive game to even threaten an upset.

Villanova held Saint Joe’s to 21 of 58 shooting (36.2%) from the field, including 7 for 31 (22.6%) from long range. The Hawks also committed 15 turnovers. Taylor Funk, who entered leading Saint Joe’s at 17.4 points per game, went scoreless, missing all six of his tries, including five from 3-point range.

“He was unbelievable,” he said.

Said Moore on what he did to stop Funk, “Just always knowing where he is. He’s a great player. Seeing my man at all times, staying connected to him.”

Villanova led by as many as 15 points in the first half before settling for a 34-22 halftime lead. Gillespie had 15 points before the break, including a pair of late 3-pointers that pushed the advantage to 12. Funk missed all four of his field-goal attempts in the first half.