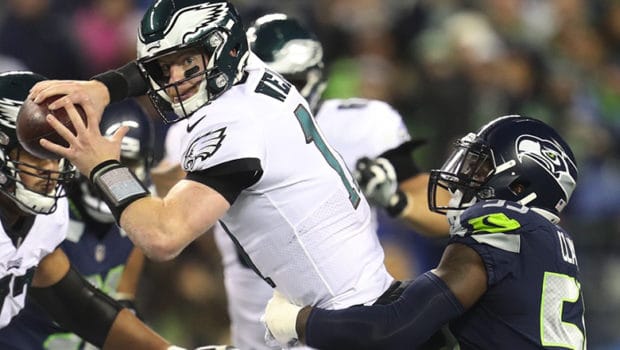 WE’RE NO. 2! EAGLES TIE-BREAKER BEHIND VIKES IN NFC PLAYOFF HUNT!

The Eagles not only lost their nine-game winning streak last night in Seattle, but also their top seed in the NFC:

1. Minnesota Vikings (10-2): NFC North leader. A superior strength of victory tiebreaker moves them into the top spot over Philly. Extend their win streak to nine next weekend, and the Vikes will officially be crowned division champions.

2. Philadelphia Eagles (10-2): NFC East leader. Their loss last night in Seattle was a reminder they’ve largely preyed on inferior competition, but they remain one win (or Dallas loss) from putting a bow on the division.

4. New Orleans Saints (9-3): NFC South leader. A season sweep of Carolina effectively gives them a two-game lead over both the Panthers and Falcons.

6. Carolina Panthers (8-4): Wild card No. 2. Costly loss in New Orleans. The good news is their next three are in Charlotte. The bad news is they’ll be hosting the Vikings, then the Packers, who may have Aaron Rodgers back.

1. New England Patriots (10-2): AFC East leader. After extending their winning streak to eight, they now own 15 consecutive seasons with double-digit victories. One more win will mean a ninth division title in a row.

2. Pittsburgh Steelers (9-2): AFC North leader. Beat the Bengals on Monday, and they reclaim the top seed — barely — based on the strength of victory tiebreaker … and move closer to the Week 15 showdown with New England that will really matter.

3. Tennessee Titans (8-4): AFC South leader. They continue to appear less imposing than Jacksonville, which shares first place in the division. But the Titans’ Week 2 win over the Jags confers the tiebreaker … for now.

4. Kansas City Chiefs (6-6): AFC West leader. A 2-1 record in division games is the only thing keeping them nominally ahead of the Chargers and Raiders at the moment despite a three-way tie.

5. Jacksonville Jaguars (8-4): Wild card No. 1. To remain on course for a Week 17 battle for the AFC South in Nashville, the Jags must pass stern test against Seattle next week.

6. Baltimore Ravens (7-5): Wild card No. 2. Next Sunday night, they’re in Pittsburgh. A loss to the arch rival Steelers would be a serious setback, especially with the Raiders and Chargers back from the dead. But Baltimore’s final three opponents have a combined record of 8-27.