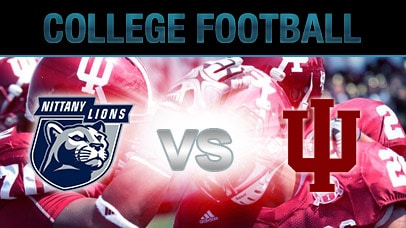 NO. 10-RANKED PENN STATE BETTER NOT STUMBLE AT INDIANA TOMORROW!

Penn State enters tomorrow’s road test with Indiana with a five-game win streak and a No. 10 ranking in the latest edition of the College Football Playoff rankings.

The Nittany Lions have turned a major corner since dropping to 2-2 on the year after a blowout loss at Michigan. Sitting at 7-2, Penn State has a real possibility at a 10-win season.

This week’s game won’t be easy, as road games, especially during the James Franklin era, rarely are. However, the Nittany Lions are playing as good as they have in a long time.

Finally feeling comfortable in Joe Moorhead’s offense, quarterback Trace McSorley has become a major key to the recent success of the team. Running back Saquon Barkley is one of the best in the country and makes teams pay attention to him on every play.

Also a key to recent success is the fact that the defense has greatly improved. That’s thanks in large part to the return of starting linebackers Jason Cabinda and Brandon Bell. Ranked as one of the worst units statistically in the nation earlier this year, the Nittany Lions, have been able to shut down opposing offenses lately.

This week’s opponent will test the Nittany Lions on defense thanks to the passing ability of quarterback Richard Lagow.