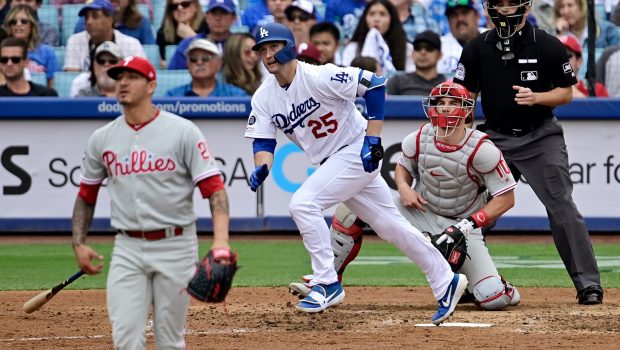 The Phillies entered the weekend series against the Dodgers in Los Angeles perceived as a contender for the National League pennant.

Rich Hill scattered three hits over seven innings, David Freese went 2 for 3 with a home run, and Russell Martin also went 2 for 3 as the Dodgers swept the Phillies.

Hill (2-1) struck out nine and walked three, including a pair of intentional passes to Maikel Franco. He did not allow a hit until J.T. Realmuto singled starting the fifth.

“He was on the attack all day and had those guys guessing,” Dodgers manager Dave Roberts said.

The West-leading Dodgers extended their winning streak to five with their seventh series sweep, improving the best home record in the major leagues to 25-7.

“We bumped up against a red-hot team,” Phillies manager Gabe Kapler said. “They outplayed us.”

Andrew McCutchen singled leading off the sixth, and Cesar Hernandez doubled in the seventh for the Phillies’ other hits off Hill.

Freese homered for the second straight game, connecting in the seventh against Vince Velasquez (2-3). Freese entered in the fifth as a defensive replacement at first base and made a leaping, left-handed grab on a sharply hit liner by Bryce Harper that ended the eighth.

“I’m 36 and just about done. I’m here for the ride,” Freese said. “I’m having a blast here and it’s not really about the 40-plus wins. I really love this group here and they treat me well.”

Freese typically knows when he might enter a game but got pressed into action unexpectedly.

“When you get bum-rushed, you’re not really ready,” he said. “My body was not ready.”

Harper was hitless in four at-bats and was 2 for 12 in the series, dropping his average to .248. Rhys Hoskins went 2 for 11 and McCutchen was 2 for 12 over the three games.

Los Angeles matched its highest-scoring inning this season when the Dodgers batted around in the eighth. Alex Verdugo and Freese had RBI singles. Chris Taylor drove in a run with a sacrifice bunt as Freese came home on a throwing error by pitcher Yacksel Rios, careening around third base and nearly falling down. Enrique Hernandez hit a sacrifice fly, and Joc Pederson had a two-run homer.

Phillies starter Nick Pivetta gave up three hits over a season-best six innings, striking out a season-high nine and walking none.

“They’re a good team but we’re a really good team, too,” Pivetta said. “When we face them again down the stretch I expect a close series again.”