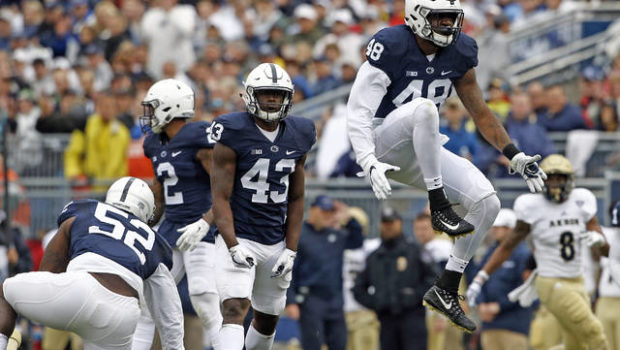 DeAndre Thompkins returned a punt for a 61-yard touchdown and brought back another for 42 yards that ignited Penn State’s 52-0 victory over Akron at Beaver Stadium.

Pitt is next up and the Panthers will have to kick away from Thompkins and risk losing some distance or shanks with directional punting.

The 80-yard burst of Saquon Barkley and his 30-yard touchdown run at the end of the first half were pretty much expected. So were the dominant plays the defense made against an MAC opponent like Akron, starting with a brilliant, diving interception by Amani Oruwariye and a sack by Ryan Buchholz.

Thompkins’ returns came out of nowhere, or at least out of the last decade, since Penn State hadn’t returned a punt for a touchdown since 2008. And they helped the sixth-ranked Lions bring an overall A Game into the 2017 season.