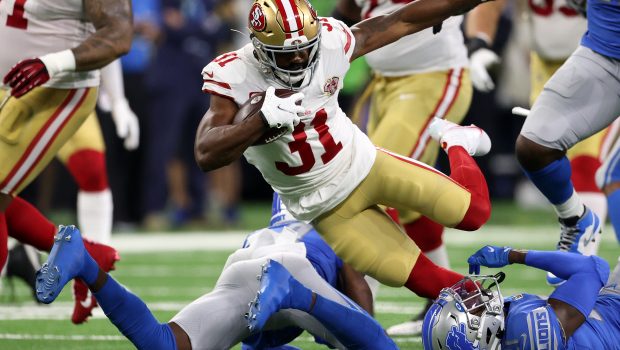 The Eagles have been installed as a 3 1/2-point underdog next Sunday against the Niners at the Linc.

But that line may be moving soon.

In the Eagles direction.

The Niners opened the regular season with a 41-33 victory at the Detroit Lions on Sunday but revealed Monday that cornerback Jason Verrett was lost for the campaign due to a torn ACL.

Additionally, running back Raheem Mostert was expected to miss at least eight weeks of action with chipped cartilage in his knee.

Mostert’s absence will be much longer.

Mostert took to Twitter Tuesday to confirm he is having season-ending knee surgery but vowed to come back from this latest setback.

Mostert carried the ball just twice for 20 yards in Detroit before he prematurely left the game. The 29-year-old was limited to just eight contests last season due to knee and ankle issues, and Spotrac notes his contract expires at the conclusion of the current campaign.

San Francisco received somewhat of a boost Sunday when rookie Elijah Mitchell replaced the injured Mostert and gained 104 yards with a touchdown on 19 carries. Mitchell could receive an opportunity to prove himself as a full-time RB1 during this coming Sunday’s matchup at the Philadelphia Eagles.