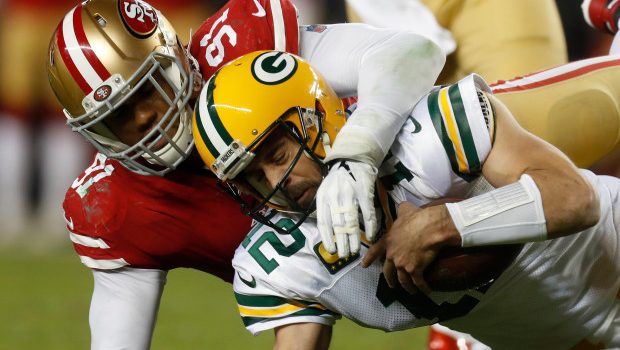 NINERS SEND PACK PACKING 37-20, AND IT WASN’T THAT CLOSE!

The San Francisco 49ers didn’t need the quarterback to throw very much.

Kyle Shanahan’s rushing attack so overwhelmed in a 37-20 bulldozing of the Green Bay Packers in the NFC Championship Game that Jimmy Garappolo only completed six of eight passes for 77 yards.

“I think I threw more (than eight passes in warmups),” Garoppolo joked as the Niners hoisted the George Halas Trophy.

The 49ers join Hall of Famer Don Shula’s 1971 and 1973 Dolphins (twice) as the only teams to finish a playoff game with fewer than 10 pass attempts in the Super Bowl era, per NFL Research.

With Raheem Mostert and the 49ers running game obliterating the Green Bay defense all game, Shanahan didn’t feel the need to pass. The Niners combined to rush 42 times for 285 yards on the night.

“‘Cause it was working,” Shanahan said of calling run play after run play. “If it’s working you stay with it. Our guys were running so hard. Our line coming out the ball, our backs. All eleven of our guys how they’ve been all year. The guys fought hard as heck. We’re going to put it all in their hands.”

Shanahan put it in the hands of Mostert time and time again. The RB galloped 29 times for 220 yards and four TDs, averaging 7.6 yards per tote. It marked the second-most rushing yards all-time in a playoff game. Mostert became just the third player in NFL history with four or more rushing TDs in a postseason bout.

“Eight passes,” Packers cornerback Tramon Williams said, via ESPN’s Rob Demovsky. “The rest was runs. The first rule of football is, ‘Stop the run’ and we didn’t do that.

Credit the diverse run calls and a 49ers blocking unit opening massive holes to run through.

“Oh yeah, they definitely created holes, especially (tight end) George (Kittle),” Mostert said. “Even the receivers and ‘Juice’ (fullback Kyle Juszczyk), man, they all did a great job blocking for me, and I couldn’t be more proud of them. They did a great job.”

Jimmy G cares not that he’ll ride the run game all the way to Miami.

“Our team is just incredible to be a part of,” Garoppolo said. “We can win in so many different ways. Raheem, those guys up front, the tight ends, obviously, were just dominating tonight. It was fun.”