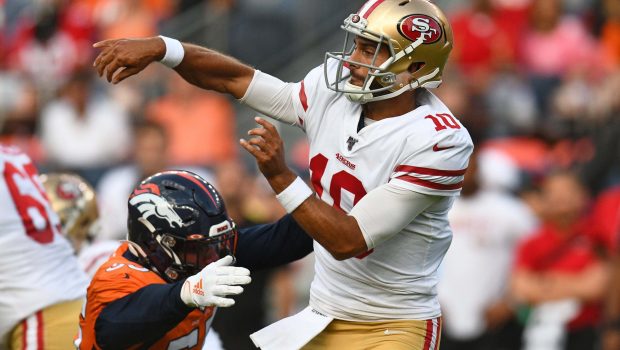 Garoppolo finished the night — which ended with a 24-15 victory over the Denver Broncos — with a 0.0 passer rating.

“Obviously [I’m] a little frustrated,” Garappolo said after the game. “But it’s the NFL, unfortunately we don’t get to play the whole game. … You wish you could be out there for more so you could bounce back. … It is what it is. It’s the preseason right now, so you just gotta take it in stride.”

Garoppolo’s first pass was knocked down and his second was intercepted as he faced pressure. His third pass was tipped and cornerback De’Vante Bausby broke up his fourth attempt.

In the next series, the 27-year-old QB was pressured into an incompletion from his end zone before he finally completed a screen pass to running back Matt Breida, who was corralled at the San Francisco 6 for no gain.

C.J. Beathard replaced Garoppolo in the next series.

The 49ers signed Garoppolo to a five-year, $137 million contract last year. After a promising start to this season, the Eastern Illinois product tore his ACL in a Week 3 game against the Kansas City Chiefs.

Garoppolo, however, didn’t blame Monday night’s performance on his knee.

“I wasn’t thinking about it, so I was happy about that,” Garoppolo said. “It didn’t bother me too much.”