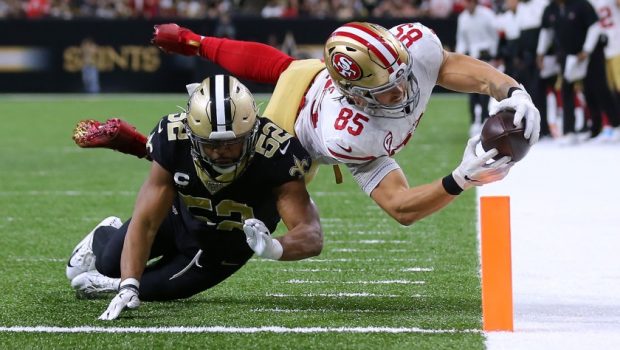 The 49ers were without tight end George Kittle for two games while he dealt with a knee sprain.

The All-Pro said yesterday he plans on playing Sunday night vs. the Eagles.

Kittle sprained his knee late in the first half of the 49ers’ season opener vs. the Arizona Cardinals when he was hit low by Cardinals safety Budda Baker. Head coach Kyle Shanahan said leading up to Week 2 that Kittle would stay behind in the Bay Area to receive treatment, then rejoin the team with a chance to play in Week 3.

Kittle told reporters though he could’ve played the week after the injury if it was later in the season.

George Kittle confirms the expected and says he plans on playing Sunday. He says he could have played Week 2 against the Jets if it were later in the year. Team opted to play it safe and keep him out two games. #49ers

It’s not a surprise to see the 49ers’ training staff work conservatively with a player’s injury, especially early in the year. Kittle last season missed two games with a popped capsule in his knee and a chipped bone in his ankle.

Shanahan’s early declaration that Kittle would be a possibility to play in Week 3, followed by Kittle’s three limited practices prior to the Giants game was a good sign that the 49ers would have their top pass catcher back by the time they faced the Eagles. A pair of full practices to open the week put the writing on the wall that he’d return, and now he’s confirmed it.