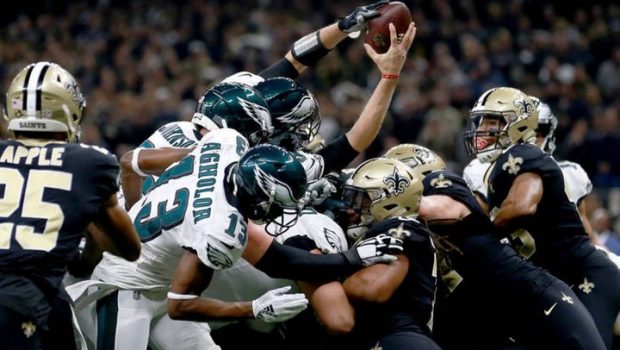 FOLES MAGIC DISAPPEARS AND EAGLES SEASON ENDS WITH A WHIMPER!

The clock struck midnight for the Eagles season.

And, as a result, a season that began with hopes of repeating as Super Bowl champion ended when the Eagles drove into Saints territory and the normally sure-handed Alshon Jeffery muffed a Nick Foles pass that was intercepted.

The Eagles led the Saints by two touchdowns at the end of the first quarter.

The sixth-seeded Birds pushed the top-seeded Saints early. But soon, the mistakes started to mount. An interception by quarterback Foles, the Saints converted a fake punt and the Eagles couldn’t recover a fumble.

Eventually, the Eagles broke under the Saints.

So this is how it ends, with a 20-14 loss against the NFC’s top seed before an announced crowd of 73,027. After their early touchdowns, the Eagles couldn’t sustain any drives. And after spending the first quarter searching for its footing, the Saints finally kicked into gear.

When New Orleans and Philly met in Week 11, the Saints crushed the Eagles, 48-7. That defeat was nasty, brutish and short. The divisional round’s defeat took longer to take hold, but when it did, it was just as asserting.

New Orleans got the ball with more than 13 minutes left in the third quarter after forcing a three-and-out to open the second half. The Eagles didn’t get the ball back until there was less than two minutes remaining in the quarter. The Saints methodically put together an 18-play, 92-yard drive that took 11 minutes, 29 seconds off the clock. When it ended, Brees hit wide receiver Michael Thomas for a 2-yard touchdown pass, and the Saints led for the first time, 17-14.

The Eagles would have their chances. With the Saints leading 20-14, kicker Will Lutz missed a 52-yard field goal at the three-minute mark. That gave the Eagles the ball at their 42. Foles hit tight end Zach Ertz over the middle for 16 yards. Then, Saints defensive end Marcus Davenport got called for roughing the passer, and the Eagles were at the Saints 27.

The stage seemed set for more heroics by Foles, the unlikely catalyst behind last year’s Super Bowl run and this season’s late season surge to make it into the playoffs as a wild-card.

But his second-down pass to Jeffery bounced through his top target’s hands and into the waiting arms of Saints cornerback Marshon Lattimore with less than two minutes left.

It appeared the Eagles would have one more chance when the Saints faced third-and-11 at their 33 with one minute left. But running back Alvin Kamara burst through the line for a 12-yard gain. Safety Malcolm Jenkins grabbed his shoelaces to precent the exclamation mark. But the Eagles season was over. Foles would never get another chance.

Brees was 28 of 38 for 301 yards with two touchdowns and a pick. Thomas abused the Eagles secondary with 12 catches for 171 yards and a touchdown.

The Eagles defense was able to get to Brees, too, with a sack by Brandon Graham and Chris Long and Tim Jernigan combining for another. But it wasn’t enough.

For a quarter, the Eagles appeared to be completely in control. Cornerback Cre’Von LeBlanc intercepted Brees on the first play of the game. Foles hit wide receiver Jordan Matthews for a 37-yard touchdown pass a couple plays later to take the early lead. Then, the defense forced a three-and-out, and the Eagles responded with a 10-play, 75-yard drive capped by a 1-yard sneak by Foles to take a shocking 14-0 lead.

That was the last time the Eagles offense would move the ball with any consistency. On their third possession, Foles had tight end Zach Ertz open up the right side, but he underthrew the ball, and Lattimore was there to get the interception.

The Saints set the tone for the rest of the game on the next drive. They put together a 12-play, 79-yard drive, and the Eagles wilted. Defensive tackle Fletcher Cox, cornerback Rasul Douglas and defensive ends Brandon Graham and Michael Bennett were all shaken up on the drive and missed plays. New Orleans converted a fourth-and-1 with a run by Taysom Hill up the gut on a fake punt. And in the end, Brees found wide receiver Keith Kirkwood in the end zone for a 2-yard touchdown to cut it to 14-7.

The Eagles couldn’t muster a response, and the Saints got the ball back late in the half. New Orleans drove into Eagles territory and settled for a 45-yard field goal by Lutz to pull within 14-10 at the break.

Then came the lengthy drive that seemed to break the Eagles. The Saints were called for three penalties on the drive and converted three third downs, including a third-and-16 at the Philadelphia 32 where Brees found Thomas over the middle for 20 yards.

New Orleans bumped its lead out to 20-14 on the next drive with a 39-yard field goal by Lutz. Once again, the Eagles had the Saints backed up in a third down, but Brees found Tre’Quan Smith for 15 on third-and-5. Then running back Mark Ingram rumbled 36 yards into Eagles territory.

The Eagles bid at defending their Super Bowl title comes to an end in a city where they had their lowest moment of the season. On Nov. 18, the Eagles were 4-6 and faced long odds to get into the playoffs. They were able to put together a late season run, spurred by Foles and a rejuvenated defense and some unlikely heroes.