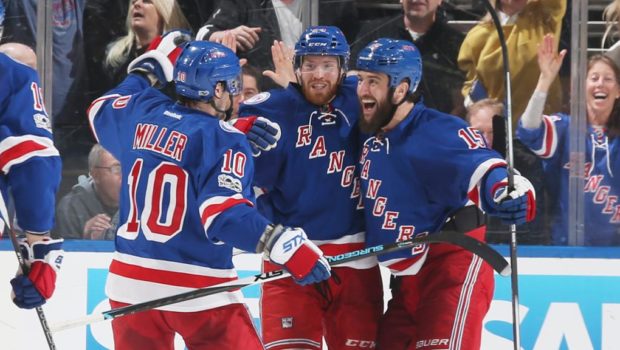 The New York Rangers are back in their series against the Ottawa Senators after losing the first two games of the Eastern Conference second round.

Their lines were on full display last night when Oscar Lindberg scored twice in a 4-1, Game 4 win at Madison Square Garden that tied the best-of-7 series 2-2.

“As soon as you have four lines contributing, whether it’s forecheck or playing good defensively, it’s just getting tough on their [defense],” Lindberg said.

Nick Holden and Chris Kreider scored, and Tanner Glass had two assists for the Rangers. Henrik Lundqvist made 22 saves and allowed two goals in the two games here.

Senators defenseman Erik Karlsson did not play the third period because of a lower-body injury. Craig Anderson allowed three goals on 20 shots before being pulled after two periods. Mike Condon made nine saves, and Kyle Turris scored in the third period.

Karlsson has been playing with two hairline fractures in his left heel but has not missed any games this postseason. Game 5 is at Ottawa on Saturday.

“We felt it was better to keep him out after the second period,” Senators coach Guy Boucher said. “He could have come back, but [we] just wanted to make sure.”

Lindberg scored his second goal of the game at 15:54 of the second period with a shot from beyond the left circle to make it 3-0. He has scored his first three NHL playoff goals in the past two games.

“I think our line’s been doing a really good job of getting pucks back from [our] forecheck, and we had two good chances today and we were able to bear down,” Lindberg said.

Kreider made it 4-0 with a power-play goal at 10:45 of the third period. Kreider, who did not score in the first seven games of this postseason, got his second goal in three games when he put Ryan McDonagh’s rebound past Condon.

Turris scored with 6:26 remaining when he beat Lundqvist with a wrist shot from the left circle.

“Sometimes you have to tip your hat to the other team,” Anderson said. “They came out, they’re good players, good team over there, and they stifled us. It’s one of those things where you learn from your mistakes, move forward, adjust, and get ready for the next battle.”