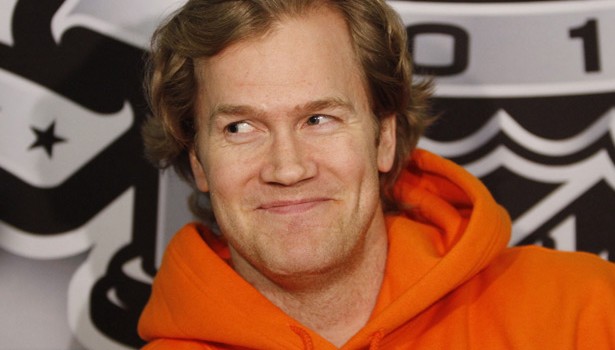 ‘RETIRED’ PRONGER, STILL BEING PAID BY FLYERS, IS HOF-ELIGIBLE!

Only in the bizarre world that is the National Hockey League could a player who has not played in three and a half years and is still under contract to his last team until 2017 make news.

Defenseman Chris Pronger, who is currently under contract with the Flyers and on long-term injured reserve, is eligible to be inducted into the Hockey Hall of Fame.

According to hockey insider Pierre LeBrun, the Hockey Hall of Fame’s general voting members altered bylaws to include those in Pronger’s situation.

Here is the change:

Within new bylaw No. 26, the key section reads: “a person is not eligible for election in the player category if he or she has played in a professional or international hockey game (which terms shall not be considered to include games played only or primarily for charitable or recreational purposes, or for any other limited purpose that the Chair of the Board of Directors determines, in his or her discretion, should not disqualify for nomination a person otherwise eligible) during any of the three (3) playing seasons immediately prior to his or her election.”

With the amendment to the bylaw, Pronger, who is under contract with the Flyers until 2017, is now eligible.

Under the old rules Pronger would’ve had to wait until 2020 to be considered.

The 40-year-old has not played since November 2011 due to post-concussion issues.

The 18-member selection committee will determine this year’s selection during meetings June 28-29.

Pronger appeared in 1,167 regular season games registering 157 goals and 698 points. He also appeared in 173 playoff games where he had 121 points.

The Dryden, Ontario native won a Stanley Cup in 2007 as a member of the Anaheim Ducks and is a two-time Olympic gold medalist.

Pronger won the Hart Trophy has the league’s most valuable player and the Norris Trophy as the top defenseman in 2000.