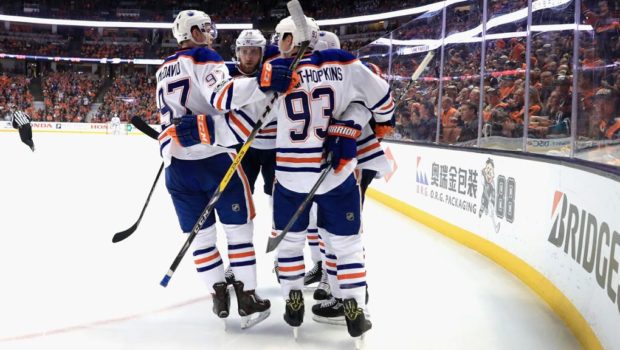 Adam Larsson scored twice in the third period, including the tiebreaking goal with 4:40 remaining, and the Edmonton Oilers defeated the Anaheim Ducks 5-3 in Game 1 of the Western Conference second round.

Leon Draisaitl had a goal and three assists for the Oilers. Mark Letestu scored twice, and Cam Talbot made 33 saves.

Nashville’s Vernon Fiddler, playing his first game of the 2017 Stanley Cup Playoffs, scored the tiebreaking goal off a fortuitous bounce with 5:05 left in the third period for a 4-3 win against the St. Louis Blues in Game 1 of the Western Conference Second Round at Scottrade Center.

Jay Bouwmeester’s failed clearing attempt went right to Watson, who sent a bouncing puck toward goalieJake Allen. He tried to pokecheck it, missed, and Fiddler tapped it through Allen’s legs.

P.K. Subban had a goal and two assists, Colin Wilson and Filip Forsberg scored, and Pekka Rinne made 27 saves for the Predators, who have won five straight Stanley Cup Playoff games.