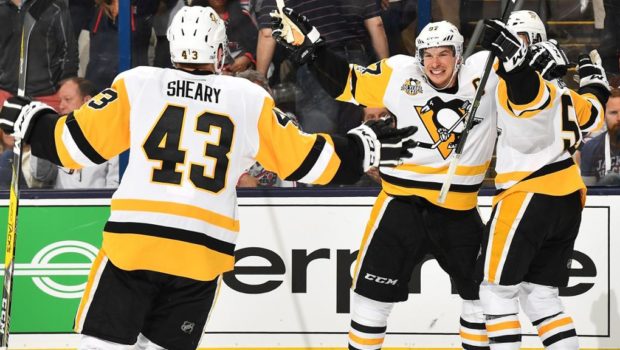 NHL: PENS HEAD TO SWEEP OF JACKETS AFTER 5-4 WIN!

Jake Guentzel scored his third goal of the game 13:10 into overtime to give the visiting Pittsburgh Penguins a 5-4 win against the Columbus Blue Jackets in Game 3 of the Eastern Conference first round on Sunday.

Guentzel became the first Pittsburgh rookie to score a hat trick in the Stanley Cup Playoffs when he beat goalie Sergei Bobrovsky off a pass from Sidney Crosby from behind the net for his fourth goal of the postseason.

“It’s kind of out of my head, kind of weird, but a pretty unique night,” Guentzel said. “Things were bouncing my way. Two off the back boards was pretty lucky.”

“They surged a little bit and we had a tough time catching up to them,” Blue Jackets coach John Tortorella said.

Brandon Dubinsky scored off the rebound of a Jack Johnson shot to tie it 4-4 with 4:49 left in the third.

Cam Atkinson scored 11 seconds into the game to give Columbus a 1-0 lead. It was the fastest goal in a playoff game in Blue Jackets history.

Werenski made it 3-1 when he scored a power-play goal from the top of the left faceoff circle at 6:10 of the first.

Werenski did not play in overtime after he was hit below his right eye with a shot by Penguins forward Phil Kessel at 13:15 of the second period, 10 seconds before Malkin scored.

Werenski returned to play seven shifts in the third period.

“It got to the point where he couldn’t see,” Tortorella said. “That’s why he didn’t play in overtime.”

Bobrovsky made 42 saves, and Fleury made 33.