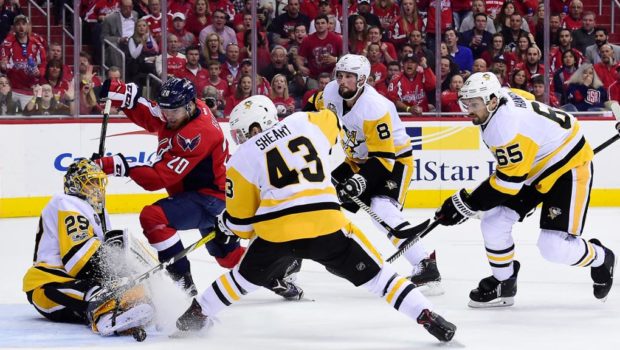 The Pittsburgh Penguins are going back to the Eastern Conference Finals!

Marc-Andre Fleury made 29 saves in a 2-0 win against the Washington Capitals in Game 7 of the Eastern Conference second round at Washington’s Verizon Center.

Pittsburgh won after losing Games 3, 5 and 6.

“It was a long series against a good team,” Fleury said. “They came hard at us till the end, and we’re proud of the way we played tonight and the way we handled the pressure and these guys over the series.”

Pittsburgh, the defending Stanley Cup champion, will play the Ottawa Senators in the conference final. Game 1 is at Pittsburgh on Saturday.

Braden Holtby made 26 saves for Washington, which has not reached the conference final since 1998.

“You need all 20 guys to win at this time of year. When guys aren’t playing great, the other guys [have to] pick them up and someone’s got to carry the torch, and tonight we didn’t have that,” Capitals forward T.J. Oshiesaid.

Bryan Rust and Patric Hornqvist scored for the Penguins, who have won six in a row on the road in Game 7.

Rust gave Pittsburgh a 1-0 lead at 8:49 of the second period, his first goal of the series after scoring four in a six-game, first-round win against the Columbus Blue Jackets.

Penguins forward Sidney Crosby, who missed Game 4 after sustaining a concussion in Game 3, had an assist, his 10th.

Hornqvist scored at 4:14 of the third period to make it 2-0 with his fourth of this postseason. The Anaheim Ducks ended a streak of four consecutive game 7 losses at home with a 2-1 win against the Edmonton Oilers.

The Ducks advanced to the Western Conference final and will play the Nashville Predators in Game 1 in Anaheim Friday. It is the second time in three seasons Anaheim has reached the conference final.

“We deserved to win that because we kept coming and kept playing,” Ducks forward Andrew Cogliano said. “It just feels awesome.”

Nick Ritchie scored at 3:21 of the third period to give Anaheim a 2-1 lead. He received a pass from Ducks defenseman Sami Vatanen and shot it under the right arm of Oilers goaltender Cam Talbot.

“I just kind of looked up and shot it,” Ritchie said. “I [saw Ryan Getzlaf] put his hands up. He had a good view of it.”

John Gibson made 23 saves for the Ducks, who won four of the last five games in the best-of-7 series but lost Game 6 7-1.

“The overall feeling right now is disappointment,” Edmonton coach Todd McLellan said. “But we basically got a college degree in a month.”

The Oilers took a 1-0 lead at 3:31 of the first period off a mistake by Ducks defenseman Shea Theodore. Anaheim forward Ryan Kesler avoided a forecheck by Patrick Maroon by making a short pass to Theodore behind the net. Theodore had Josh Manson open for a pass as he skated out from behind the goal but elected to cut in front of Gibson.

Oilers forward Drake Caggiula checked Theodore as he moved in front of the crease, knocking him into Gibson, who fell back into his net as the puck slid through his pads and across the goal line. It was Caggiula’s third goal in the past four games.

“We were down 1-0 for a little bit, and we didn’t panic,” Ritchie said. “We actually started to play better once they scored.”

Anaheim tied the game at 1-1 at 8:55 of the second period on Cogliano’s first goal of the Stanley Cup Playoffs.

“I thought our learning process was good,” Getzlaf said. “We had some adversity to start the game and we were able to overcome it.”

The Ducks outshot the Oilers 16-3 in the period.

“It’s going to take some time to get over it, but there are a lot of positives,” Oilers captain Connor McDavidsaid. “We battled hard up and down the lineup.”