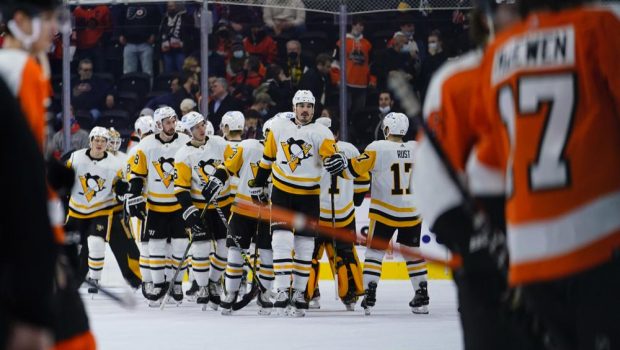 NHL MADE THE FLYERS PLAY, BLOWN AWAY BY PENS, GOOD THING VIRTUALLY NO ONE WATCHED ON TV!

Don’t look now, but the Flyers are reverting to the kind of play they demonstrated during a 10-game losing streak earlier this season.

They lost badly to the Pittsburgh Penguins last night.

And virtually no one in the Philly area saw the game because it was on ESPN+ and HULU.

Would anyone pay extra money to watch the Flyers?

They are sinking in the Metro standings, stuck at 32 points for what seems like forever.

The Penguins won 10 straight games for the sixth time in franchise history, getting two goals each from Bryan Rust and Jake Guentzel to beat the depleted Flyers 6-2.

The Penguins won the second game of a back-to-back and haven’t lost since Dec. 1 against Edmonton. The Penguins won five games during the streak on the road and can at least think about the team record of 17 straight set over March-April 1993. The Penguins also won 15 straight games in March 2013 and have winning streaks of 12, 11 and 10 games, all since 1999.

The Penguins played a Flyers team ravaged by injuries and even more players in the COVID-19 protocol. The Flyers had six players in the protocol, including top-point scorer and team captain Claude Giroux, defenseman Ivan Provorov and forward Travis Konecny. The NHL postponed Thursday’s game between Anaheim and the Detroit Red Wings because of COVID-19-related issues affecting the Ducks.

Yet the Flyers played on and lost their fourth straight game.

“We have nine, 10 guys out, six guys in protocol. It’s a tough league to win that way,” Flyers center Scott Laughton said.

Flyers forward James van Riemsdyk said he tried not to worry about the fairness of the situation.

“Obviously it’s out of our control, to a degree,” he said. “You just have to hope that everyone making these decisions, that it’s kind of relatively fair across the board for that sort of stuff. I don’t want to waste too much energy thinking about stuff like that. I just try to focus on the game tonight.”

The Flyers could have used more focus — and healthy bodies.

But no team has stopped the Penguins over the last month, and they started strong early a night after they rallied for a 5-3 home win over the St. Louis Blues. Tristan Jarry stopped 18 shots. Evan Rodrigues scored his 15th goal in the third and Brian Boyle also scored a short-handed goal in the period to turn this one into a rout.

Cam Atkinson scored his 14th goal of the season for the Flyers in the second period and Oskar Lindblom scored a power-play goal in the third. Hart stopped 26 shots.

“Bad things happen but what are you going to do? You have to make sure you respond to that,” Flyers interim coach Mike Yeo said. “We have a chance to prove that this isn’t us. Things right now aren’t going well enough during the season. We need to a way to push harder. We have to show more fight in that situation.”