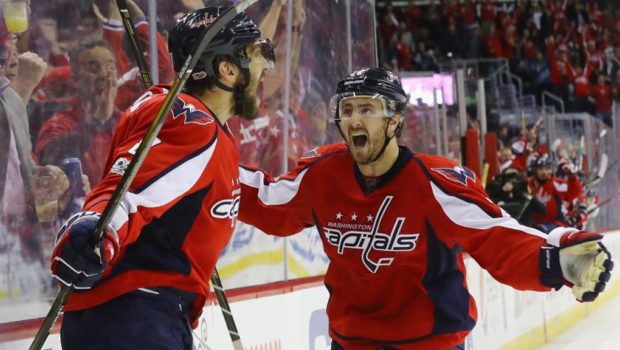 The Washington Capitals scored three goals in the third period, including two in 27 seconds, to defeat the Pittsburgh Penguins 4-2 and avoid elimination in Game 5 of the Eastern Conference second round.

Washington trails the best-of-7 series 3-2 with Game 6 at Pittsburgh on Monday.

Evgeny Kuznetsov and Alex Ovechkin scored at 7:20 and 7:47 of the third period to give Washington a 4-2 lead.

Andre Burakovsky and Nicklas Backstrom scored, and Braden Holtby made 20 saves for the Capitals, who have won two of the past three games.

Kyle Turris scored 6:28 into overtime to give the Ottawa Senators a 5-4 win against the New York Rangers in Game 5 of the Eastern Conference second round.

The Senators lead the best-of-7 series 3-2 with Game 6 at New York on Tuesday.

Turris had a shot blocked by Rangers defenseman Dan Girardi, but the puck bounced back to him and he slipped it through Henrik Lundqvist’s pads.