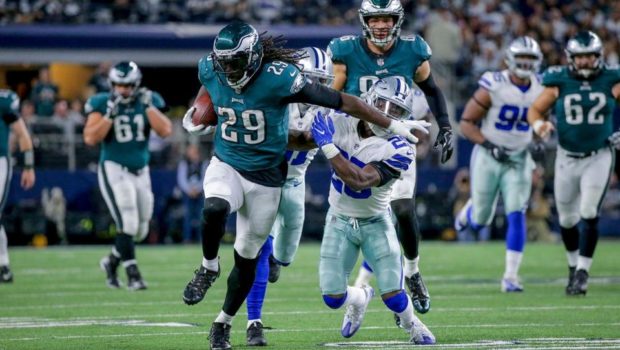 Not to put too fine a point on it, but the Eagles are the best team in the NFL.

For the second week in a row:

The Eagles have lapped the field in the NFC East, as their dominant second half Sunday night in Dallas demonstrated. It took them a half to shake off the rust from their bye week, but once they got things revved up, Philly again looked very much like the league’s most complete team.

There’s no question now that the Patriots and Steelers are the AFC’s top two teams, and by a significant margin. For each, the rest of the regular season is all about which one will host the AFC championship game.

The Saints suddenly can do no wrong, even when they find themselves trailing by 15 points late in the fourth quarter at home to what should have been an overmatched opponent. Any great season has that magical feel to it. It’s beginning to feel like that for these Saints, isn’t it?

The Steelers looked very good Thursday night against the Titans and they’re on a roll now, with five straight victories. They should be able to keep that going Sunday night at home against the struggling Packers.

Their lopsided triumph over the Rams reinforces the possibility that the Vikings could become the first team to play a Super Bowl in its own stadium. They are certainly capable of that. But there’s a long way to go and it should be a very interesting three-way struggle between the Eagles, Saints and Vikings to see which team emerges from the NFC.

The Jaguars did what had to be done to win in Cleveland. Now it’s back to having to beat real NFL teams, although the schedule only gets marginally tougher with games against the Cardinals and Colts the next two weekends.

The Panthers return from their bye to face the Jets on Sunday at the Meadowlands. Carolina can’t afford a misstep, with key games against the Saints and Vikings looming. The offense should get a major boost from the expected return of TE Greg Olsen, while a decision is to be made later in the week on whether center Ryan Kalil also will be back in the lineup.

The loss Sunday at Minnesota was not a promising beginning to the rugged stretch of the schedule that will show how the Rams stack up against the other top NFC contenders. If they don’t fare far better in the coming weeks against the Saints, Eagles and Seahawks, there will be no choice but to conclude that they are a year away from being the real deal.

The Falcons just held on Monday night in Seattle despite some shaky moments down the stretch. They’re a factor again in the NFC playoff race. But they still don’t inspire much confidence when they’re playing with a lead.

The Lions are back in a good groove, with three straight wins. But the level of competition increases considerably with the Thanksgiving visit from the Vikings.

The fact that the Ravens are back in the AFC wild-card race speaks more to the mediocrity of the conference’s middle-class teams than it does of any great resolve by the Ravens. Shutting out the Packers with Brett Hundley at QB was not exactly an accomplishment of historic proportions. But it might have been a good warm-up for facing Tom Savage and the Texans on Monday night.

The Titans aren’t ready to compete with the AFC’s best teams. That was evident during Thursday night’s ugly loss at Pittsburgh, in which QB Marcus Mariota threw four interceptions. But the Titans remain very much in the playoff mix, and they must take full advantage of an upcoming four-game stretch against the Colts, Texans, Cardinals and 49ers.

When kicker Blair Walsh’s would-be game-tying FG fell agonizingly short in Monday night’s home loss to the Falcons, the Seahawks were left looking an awful lot like a non-playoff team. No one fears the injury-decimated secondary. Russell Wilson was a pretty good one-man show Monday, but he simply doesn’t have enough help these days. Coach Pete Carroll’s misguided fake-FG-gone-bad at the end of the first half certainly didn’t help. Perhaps his only defense was: Did you really trust Walsh to make the kick, anyway?

The Chiefs are good enough to win the surprisingly feeble AFC West but simply aren’t good enough to challenge the Patriots or Steelers for AFC supremacy. Their 1-4 downward spiral since the 5-0 start has made that clear. If this continues, would the Chiefs ever consider a late-season switch from Alex Smith — who certainly did not resemble an MVP candidate Sunday — to QB-of-the-future Patrick Mahomes?

The Buccaneers are playing better since Ryan Fitzpatrick took over for Jameis Winston at QB. But things get tougher this weekend on a visit to Atlanta.

The Chargers are approaching respectability, with wins in four of six games since their 0-4 beginning. The Bills’ QB follies certainly helped last weekend. Now comes a Thanksgiving matchup with the extremely vulnerable Cowboys.

Tom Savage is making everyone forget about Deshaun Watson. Okay, not really. Not even close. But at least the Texans finally won a game with Savage at QB.

Don’t look now but even as disappointing as the Bengals have been, their season is not totally, completely over. They can get back to within a game of .500 if they beat the Browns on Sunday. Given that it appears there just might be an 8-8 team in the AFC playoffs, the Bengals still have some possibilities.

Yes, the intentional grounding call against Kirk Cousins was erroneous. Yes, the league realizes that. And yes, a correct non-call at that point might have permitted the Redskins to escape with a win Sunday in New Orleans. But that one botched call does not account entirely for the Redskins squandering a 15-point lead late in the fourth quarter. They did their part, also.

Their performance against the Patriots on Sunday in Mexico City was dreadful. It’s clear that the talk about the Raiders being a championship contender during what’s left of their time in Oakland was nothing more than that.

The Jets, with their pre-bye loss to the Buccaneers and Ryan Fitzpatrick, finally seemed to be getting on board with that alleged plan to tank the season. But now it’s too late.

You know how NFL teams say that those dreaded distractions must be avoided at all costs? What about when the owner of the team is the person creating the off-field turbulence?

Just think how terrible the Green Bay offense would be with Brett Hundley at QB if Coach Mike McCarthy had not invested all that time in Hundley’s development, as he testily reminded everyone he’d done while bristling at questions about the lack of consideration given by the Packers to signing Colin Kaepernick.

Which was the worst of Coach Sean McDermott’s moves: benching Tyrod Taylor in favor of Nathan Peterman; allowing Peterman to stay in the game long enough to throw five interceptions; or saying that he didn’t regret the switch? They’re all terrible. McDermott let down a team that had — and has — a chance to reach the playoffs with an ill-advised decision that wasn’t fair to either quarterback.

Blaine Gabbert is not the answer at QB, as if there was any doubt about that. Gabbert actually played reasonably well in the loss to the Texans. But when a team eagerly awaits the return of Drew Stanton, that tells you all that you need to know.

The Colts are returning from their bye to finish their season because NFL rules say they have to.

The Bears are 2-4 since prized rookie Mitchell Trubisky took over as the starter at QB. But there have been glimpses of Trubisky’s promise, and that will have to be good enough for Chicago.

So the Giants haven’t given up, after all. But was the spirited effort, especially on defense, in Sunday’s stunning victory at home over the Chiefs merely a one-time thing? Or can the Giants keep it going Thanksgiving night at FedEx Field against the Redskins?

The Dolphins are reeling and there’s little realistic hope that matters will improve when they play Sunday at New England. Jay Cutler’s playing status is uncertain after he was placed in the concussion protocol. That could mean Matt Moore starting at QB against the Patriots. The last time some observers wondered if the Dolphins were better off with Moore at QB, they lost by a 40-0 margin at Baltimore.

If Broncos players don’t like what John Elway said about them being soft, maybe they should go out and do something about it on the field. It has been a rapid deterioration of what was a Super Bowl winner two seasons ago.