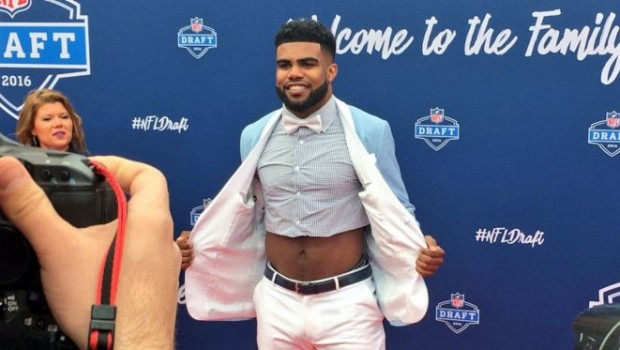 Yesterday’s decision by the NFL to suspend Cowboys star running back Ezekiel Elliott is stunning.

Unlike Ray Rice, who was also suspended for domestic abuse, he is one of the best players for one the highest-profile teams.

The NFL faced an uproar when then-Baltimore Ravens running back Rice received a two-game suspension in 2014 after being charged with aggravated assault for striking his then-fiancee. Later, video emerged showing Rice hitting the woman and Rice was suspended indefinitely—with commissioner Roger Goodell then taking responsibility for mishandling the incident.

The result of that upheaval was a stricter policy that gave Goodell the power to levy suspensions of at least six games in matters of domestic violence.

“I would characterize it as valuable lessons learned from the response to the Ray Rice case. Understanding the fact that there was no criminal prosecution doesn’t mean nothing happened,” Judy Kluger, executive director of Sanctuary for Families and a former New York state judge, told the Wall Street Journal. “They’re sending a strong message to young men and boys that sports figures like everyone else have to be held to the same standards.”

It has been more than a year since the allegations to police of alleged domestic violence in Ohio were made against Elliot. The prosecutors, in their decision, cited a lack of consistent information and sufficient evidence for allegations of domestic violence on five separate occasions between July 17 and July 22, 2016.

Even so, the NFL determined that, in the league’s eyes, there was “credible evidence established that Elliott engaged in conduct that violated NFL policy.” The NFL said that it assessed the available evidence and consulted medical experts, and that Goodell consulted with four external advisers, in keeping with the league’s personal conduct policy, before reaching its decision. Elliott and his legal team met with representatives of the league and the NFL Players Association in June in New York City to discuss the case.

“There is an eyewitness here,” said Peter Harvey, one of the league’s independent experts and a former New Jersey Attorney General. “The eyewitness is Tiffany Thompson herself. She is a victim and a survivor.”

And even when it wasn’t clear whether or not Elliott would be suspended, he was making news for the wrong reasons. The NFL, in its report on Elliott’s suspension, noted a March incident at a St. Patrick’s Day parade in Dallas that “was inappropriate and disturbing, and reflected a lack of respect for women.”

That was the only other incident the league considered in its investigation. But this summer police in Dallas investigated a reported offense involving Elliott at a bar and ultimately suspended the probe after detectives could not contact the victim and no witnesses came forward, according to police.

Despite the league’s ruling, it’s possible the case is far from over: Elliott has three days to formally appeal the decision. And there may be legal options beyond that if Elliott and his team try and take his case to court—as Tom Brady did in the wake of the Deflategate scandal, delaying his suspension. That means there’s actually a chance Elliott doesn’t sit out any of this season, depending on how long the proceedings last.

That could be pivotal for the Cowboys, who watched Elliott ascend to superstardom last season even as these allegations and the threat of a potential suspension loomed. They picked Elliott fourth overall in the 2016 draft from Ohio State and as a rookie he went on to rush for 1,631 rushing yards while leading the Cowboys to the NFC East crown.

Losing Elliott for six games could prove potentially crippling for a Dallas team hoping to build off last year’s 13-3 season. That success was built around two rookie sensations—Elliott and quarterback Dak Prescott—who were positioned to be franchise linchpins for the foreseeable future. After losing in the Divisional Round of last season’s playoffs, their expected growth made the Cowboys one of the favorites to come out of the NFC this year.