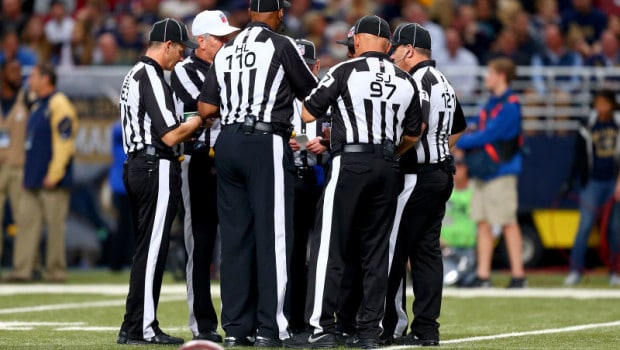 NFL ZEBRAS ARE INCOMPETENT: THEY COULD SCREW UP THE PLAYOFFS!

Even a casual Eagles fan knows two things for sure:

NFL officials are having the worst in history.

The popularity of the sport has spiked because of how easy the sport is to gamble on.

But that would change if gamblers thought the game wasn’t on the level.

An ad hoc rule tweak will go into effect for the playoffs, recommended by the league’s competition committee and approved by Roger Goodell. Here’s the wording of the change to officiating procedures:

For the 2015 Postseason, consultation may occur between the Referee and the VP of Officiating or his designee located in the league’s officiating headquarters in New York regarding the correct application of playing rules. In addition to the VP of Officiating’s current role in Instant Replay, this consultation will only include the appropriate assessment of penalty yardage, the proper administration of the game clock, the correct down, or any other administrative matter not currently reviewable.

This will not include the ability to call or change a foul, or otherwise become involved in on-field judgment calls that are not subject to the current Instant Replay system.

When there’s confusion on the field, officials will be able to get on the phone to Dean Blandino and the New York office to get it right, and not just on reviewable plays. The additions to what can be reviewed may seem slight, but those are potentially big mistakes, and they’ve all happened this season. Game clocks have ticked away when they should have been stopped, and officials have completely lost track of downs.

This change will make sure more things are gotten right, which is good, but it’ll also shield the NFL from a catastrophic blunder that changes the outcome of a playoff game and sends the nation into conniptions. Everybody wins! Except for people who don’t think football games should be five hours long.