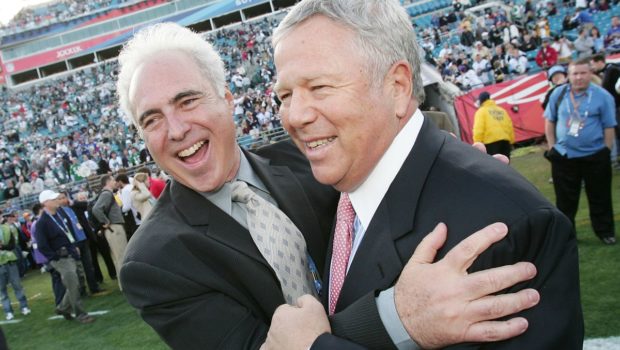 NFL TEEING UP A DISCIPLINE PASS ON KRAFT IN SEX CASE!

With the criminal case against New England Patriots owner Robert Kraft on the verge of unraveling, NFL Commissioner Roger Goodell declined to say whether the league intends to punish Kraft under its personal conduct policy.

“I’m not going to speculate on the last part about discipline,” Goodell said during a midday break of a one-day NFL owners’ meeting. “Again, [the NFL’s priority is] getting all the facts. But yes, of course we’ll be gathering our own facts and trying to understand what actually transpired, as we would in any case.”

Kraft attended the meeting but was not available to speak to reporters. He continues to go about his football-related business while facing misdemeanor charges in Florida for solicitation of prostitution.

Kraft declined a plea deal, and his attorneys won a key victory in court when a judge excluded video evidence gathered by police at a day spa. But even if Kraft is not convicted of a crime, the conduct policy would empower Goodell to discipline him with a suspension or fine.

Goodell refused to offer a timeline for the league making a disciplinary ruling.

“There’s a proceeding going on,” Goodell said. “We’ll wait until that proceeding is concluded.”