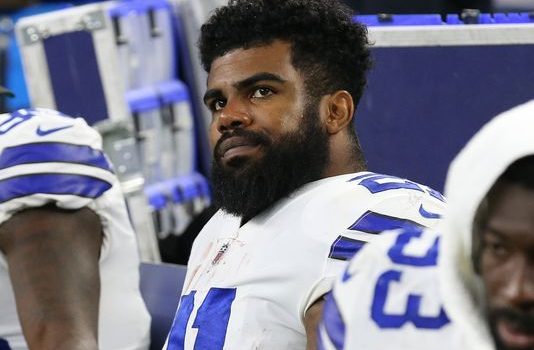 NFL SAYS ITS SUSPENSION OF COWBOY ZEKE IS UNAPPEALABLE!

The NFL argued in a pair of filings late last night that Dallas Cowboys running back Ezekiel Elliott does not have the legal standing to challenge in federal court a six-game suspension over domestic assault allegations.

The NFL Players Association filed a petition to vacate Elliott’s suspension and then sought a temporary restraining order hours after Elliott’s three-day appeals hearing ended on Thursday. The NFL-appointed arbitrator, Harold Henderson, has yet to issue his ruling on Elliott’s appeal.

“The NFLPA also lacks standing to seek a contingent order preemptively challenging an award that clearly has not yet (and may never) cause it or Ezekiel Elliott any harm,” Eric Gambrell, a lawyer representing the NFL, wrote in one of the filings. “And the NFLPA’s claim is unripe to boot, as even the NFLPA acknowledges that the arbitrator’s forthcoming award could still afford the NFLPA all the relief it seeks.”