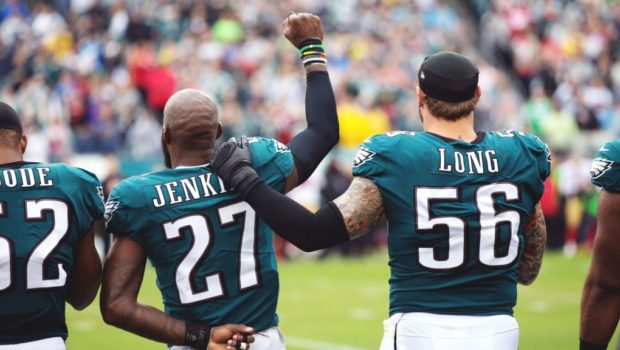 So says the Undefeated:

Implicit bias research shows that many white people harbor negative assumptions about black people. Thus, as soon as this idea — that black protesting athletes have caused NFL ratings to deteriorate — infiltrates the national discussion, anti-black biases afford it instant legitimacy such that it becomes the explanation, crowding out all others.

One explanation that hasn’t been given proper attention is how Thursday Night Football torpedoes the NFL brand. Many have excoriated the games’ atrocious quality. In a Players’ Tribune piece, Seattle Seahawks cornerback Richard Sherman called the games a “poopfest” because players’ bodies are not ready to play on only four days’ rest, leading to a substandard product. In the latest Thursday Night Football game between the New Orleans Saints and Atlanta Falcons, commentators repeatedly mentioned how injuries and players’ fatigue, after only four days of rest since the teams’ Sunday games, were affecting the Thursday game. This partly explains whyThursday Night Football games consistently rate lower than other network TV prime-time games.

The problem, however, is larger than that. Thursday night games have been bad enough that some cannot watch them. So they turn them off. In doing this, football viewers have learned a behavior that threatens the health of the league: When a game is boring, or not well-played, find something else to watch.

A recent CNBC report supports this point: “While the number of people [watching NFL games] is relatively steady, the average person spends less time watching.” People are tuning in to games; they are just turning them off. And why now when they didn’t 10 years ago? The experience of watching Thursday Night Football, I think, has taught them to do that when not adequately entertained: