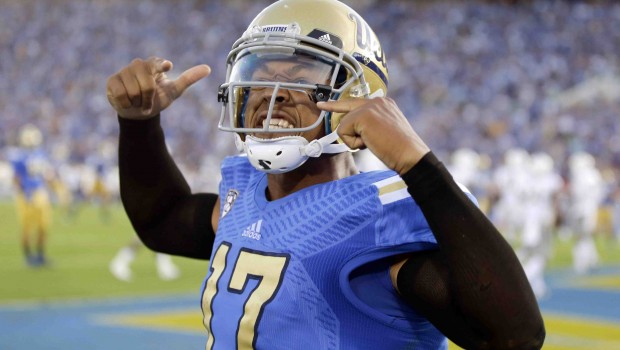 WHY HAS THE NFL PASSED ON DRAFTING MORE QUARTERBACKS?

So, how come quarterbacks were not more highly prized in the second day of the NFL draft?

Even though QBs were the first and second picks for just the sixth time in league history, 72 selections came and went before a third was taken — New Orleans ended the drought Friday night by choosing Colorado State’s Garrett Grayson at No. 75. St. Louis took Oregon State’s Sean Mannion at No. 89.

Brett Hundley (photo above), who skipped his remaining year of eligibility at UCLA to join the professional ranks, didn’t get a phone call. He was the first Bruins quarterback to win at least nine games in three consecutive seasons and was the school’s all-time leader with 75 touchdown passes and 11,481 total yards.

Despite Hundley’s success, some scouts graded him as a fourth-rounder but thought a team might fall in love with him and take him sooner. There are questions about his accuracy — although his college stats don’t reflect that — and his reliance on tucking the ball and running, a perilous habit in the NFL.

Two years ago, USC’s Matt Barkley endured a similar wait, watching and agonizing as Rounds 1, 2 and 3 dripped past. Hundley can only hope for a Day 3 outcome similar to Barkley, who was snapped up by Philly with the first pick of the fourth round.

Two of Hundley’s teammates were selected Friday. Linebacker Eric Kendricks went to Minnesota with the 13th pick of the second round, and defensive end Owamagbe Odighizuwa was grabbed by the New York Giants with the 10th selection of the third round.

Kendricks will be reunited with his former UCLA teammate, Anthony Barr, chosen ninth overall by the Vikings last year. The Giants see Odighizuwa as a potential bookend pass rusher to Jason Pierre-Paul.

The most eye-opening slide of this draft was the one Nebraska outside linebacker Randy Gregory took. At one point widely considered a top-10 pick, he tumbled all the way to No. 60 where the Dallas Cowboys took him. He was seen as a character risk after testing positive for marijuana at the scouting combine in February, showing up late for meetings with teams, and generally giving potential employers cause for concern.

Gregory, who had the longest wait of the 26 players who attended the draft in person, said he harbored no ill feelings about his eternity in the green room.

“I deserved [to have to wait] at the end of the day,” said Gregory, who actually had to stick around until the end of the day. “… I made a real dumb decision that’s been the most embarrassing part of my life up to this point. I’m just ready to fix it.”

It seems there’s no easy fix for Louisiana State tackle La’el Collins, who was projected as a first-round pick and even came to Chicago for the first day the prospects were in town, but was not made available to media.

Authorities in Baton Rouge, La., want to speak with Collins in the wake of the shooting death of his pregnant ex-girlfriend last week. Police have said Collins is not a suspect but that they want to know whether he has helpful information. They are expected to meet with him in the coming days.

The NFL denied a request by Collins to remove himself from the draft and instead be placed in a supplemental draft later this year. According to reports, his agent said Collins would not play next year if he went undrafted Friday, which was the case.

For the first time since 1964, the NFL is staging the draft outside of New York City. There were lots of open seats in the Auditorium Theatre of Roosevelt University for Day 2 — something that wasn’t the case in a typical draft at Radio City Music Hall — but an estimated crowd of 50,000 watched on screens in Grant Park across the street. On Saturday, when the draft concludes with Rounds 4-7, the entire event will take place in a festival-like atmosphere in that park.