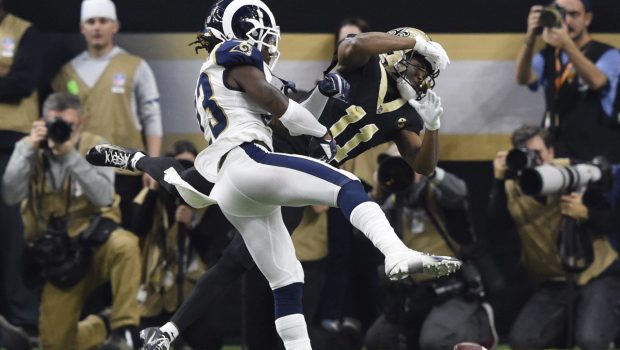 NFL OWNERS VOTE TO SOLVE ZEBRA SCREW-UPS LIKE THIS!

NFL owners are trying to eliminate the possibility that an egregious zebra screw-up like the non-call in the Saints-Rams NFC title game (above) never happens again.

Good luck with that.

They voted last night at their league meeting in Phoenix to allow offensive and defensive pass interference penalties, including non-calls, to be subject to challenge and replay review.

For the 2019 season, coaches can challenge any flags or missed penalties until the final two minutes, when such instances are subject to booth review only.

“I personally believe it was the fact that every club wanted to get, and the league wanted to get these plays right,” NFL Commissioner Roger Goodell said at a news conference after the vote. “Replay is to get it right. And ultimately people compromised, I think, on long-held views because they want to get the system right. They want to get the play right.”

Owners voted 31-1 in favor of expanded replay, with Mike Brown of the Cincinnati Bengals being the lone negative vote, a person with knowledge of the situation told USA TODAY Sports’ Jarrett Bell.

The vote comes after the Saints’ NFC Championship Game loss to the Los Angeles Rams, in which Rams cornerback Nickell Robey-Coleman was not called for a pass interference penalty against New Orleans receiver Tommylee Lewis in the final two minutes of the game.

“There was a lot to it,” Broncos general manager John Elway told USA TODAY Sports. “To finally get it to where you got everybody – you got what the coaches wanted – and try to get the one play that was so painful last year, to try to get that fixed. This will be able to cover that.

“I feel good about it. I think everybody else feels good about it. We’re never going to be able to fix everybody’s problems, but again, this is our first attempt at putting a flag on the field for the first time. That’s new.”

Neither of the competition committee’s original two proposals for the meeting in Phoenix would have allowed for missed penalties to be subject to challenge, but the outlook changed after debate among coaches.

“I felt like we went around the block twice and found the address we were circling,” Saints coach Sean Payton said after the vote. “It wasn’t like we went to another neighborhood.

“I was never pessimistic. I was just uncertain. The challenge was there were five different proposals and directions. … This is a very positive statement that we were interested in fixing but wanted to make sure it wasn’t a knee-jerk.”

Said competition committee chairman and Atlanta Falcons president Rich McKay: “We were able to make sausage in one day.”

Saints owner Gayle Benson, who vowed to “aggressively pursue changes” to NFL rules in the aftermath of the NFC Championship Game, was satisfied by the changes.

“That’s why I made the statements,” Benson said. “That’s the path we were going for, because it could have happened to anyone. It could’ve happened to any of the 32 teams. It happened to us, but I wanted the rule to change. Going forward, it’ll be better for everybody.”