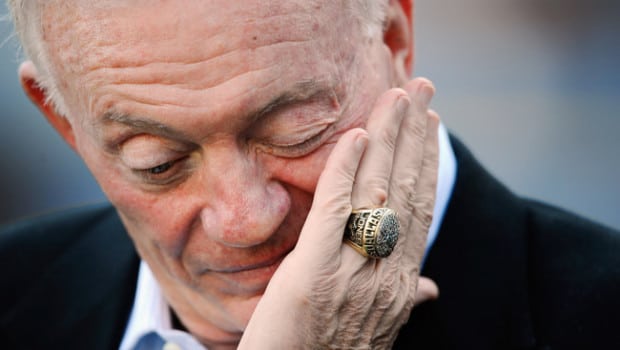 Cowboys owner Jerry Jones may have gone too far in his public campaign against NFL commish Roger Goodell.

According to ProFootballTalk.com, a league source with knowledge of the situation says that multiple owners already have been discussing the possibility of yanking the Dallas franchise from Jones!

The NFL’s Constitution & Bylaws authorizes the commissioner to determine that an owner “has been or is guilty of conduct detrimental to the welfare of the League or professional football.” If the commissioner believes the available sanction (a $500,000 fine) is “not adequate or sufficient,” the commissioner may refer the issue to the NFL’s executive committee, which has the power to compel “[c]ancellation or forfeiture of the franchise in the league of any member club involved or implicated,” with a directive to sell the team.

As the source explained it, the primary affront comes from the belief among owners that Jones instigated Papa John’s CEO John Schnatter to disparage the NFL, blaming league leadership for ratings declines and, in turn, a reduction in Papa John’s revenues.

It’s unknown whether the NFL or any of its owners has warned Jones of a potential attack on his ownership of the Cowboys, and at this point it’s unlikely that any such effort will be made. However, the topic has emerged among owners, due directly to Jones’ recent threats of litigation and related efforts to disrupt the business of the league.