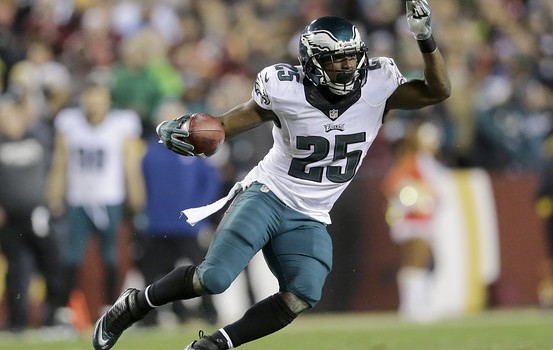 Whenever I see a quote or a story attributed to an anonymous source, I typically turn the other way and run.

Unless you know the name of the source, you simply cannot judge a source’s credibility without his or her identity.

But whenever I see that Mark Eckel of NJ.com is quoting an anonymous source, I make an exception.

Because unlike “reporters” like Jimmy Kempski, who have no sources (at least he never identifies one), Eckel has the best wires in the NFL.

Here is what one anonymous NFL executive told Eckel about Eagles running backs:

“I’ll take [Shady] McCoy over [DeMarcus] Murray every time,” an executive in personnel for another team said. “When you played the Eagles, you feared McCoy. He was the guy who scared you the most. When you played Dallas, you didn’t fear Murray. He’s good. But you didn’t fear him. You feared Dez (Bryant), or (Tony) Romo, but not Murray.”

Kelly’s and the Eagles’ thinking is that Murray, who led the NFL with 1,845 yards and scored 13 touchdowns last season, fits their offense better than McCoy, who rushed for 1,319 yards (on 80 less carries) last season.

Murray, and Mathews are more straight-ahead, between the tackle types of runners. McCoy would pick his spots, and while it would lead to some “bad” runs, it would also leads to some big ones.

“That’s the difference in my mind,” the executive said. “Don’t get me wrong, Murray is good and he had a great year last year. But McCoy is a game breaker. He can turn a game around with one big run.”

Sproles got 337 snaps last year, 29 percent of the offensive plays. Polk got 97, or just eight percent, and almost all of them were either short-yardage or goal-line situations.

This year the plan is to use Sproles in a variety of ways in and out of the backfield. Don’t be surprised to see him lined up anywhere from the backfield to in the slot to out wide to create mismatches for the defense.

“He helped them last year,” the executive said of Sproles. “You can use him a lot of ways; you just don’t want to overuse him.”

Mathews, who has missed 20 games in five years, and 10 last year with an ankle injury, is expected to spell Murray through the course of a game so he doesn’t have to carry the ball 392 times again.

Last year in just six games for San Diego he carried 74 times for 330 yards and scored three touchdowns. In 2013, his only 16-game season, he carried 285 times for 1,255 yards with six touchdowns and caught 26 passes for another 189 yards and a touchdown.

“Mathews is better than Polk, no question,” the personnel executive said. “The thing with Mathews is you have to keep him healthy.”